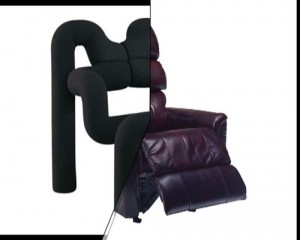 Display with Sound Simon Denny,Hannah Sawtell,Oscar Tuazon
26th September ~ 24th October 2009
‘Display With Sound’ 2002 which was titled ‘Shelf Display With Clock Radio’ 2002 at the Whitechapel show ‘Early One Morning…’ played a sound that was a straight recording onto CD of a 1930s Chinese language lesson collection on vinyl I picked up somewhere in a North London charity shop. “Lesson one (in English): o o o a a a (Chinese phonemes) … Lesson two: u u u i i i …etc.” I imagined the language analogy would highlight my concerns with form and idiom and the fact of the lesson permeating the space of the gallery would heighten the sense of the real in my displays. I wanted to avoid the emblematic or the gesture, which stands for an ideological position or just simply a novel one; the kind of art that is a sign of liberal inclusion with all its contradictions. I was interested in affect, what the gradual accumulation of the signs would amount to and how this could be directed to keep a space open; an undoing of the symbolic structure of reality.

When you make art you mean to make a better world or at least change it. This is the motivation of art. It is mostly unacknowledged but is implicit in every decision. The culture industry understands and utilizes this knowledge to paradoxically maintain the structure of the social space by instituting a veneer of novelty. Art short-circuits the phantasmal veil of reality, of ideology; an analogy would be a glitch on videotape or a digital file or those alien interruptions in earth communication networks in science fiction. This could be a traumatic experience for those who like their art as formal ritual or as the spectacle of the same but for others it will remain a joyful break from constraining habits and oppressive injunctions, and perhaps even more than that, a place of resistance.

I still hold that everything made is already a remake in the sense that it represents the category of objects it belongs to. But maybe even more specifically, it will be an adjustment of something that already exists. A new vase is still a vase. It follows that the context in which objects appear is of the utmost importance. Without seeing this we could not see anything new, only tradition. Perhaps this is what new objects ultimately do; they draw our attention to how it is that we find ourselves in a particular context. That means a slight readjustment is necessary in thinking about ‘making’ in relation to tradition and history. At any rate all of this was justification enough for me to ‘arrange’ as opposed to ‘make’. Arrangement by necessity implies a kind of interpretation, an editing process that must happen according to some criteria. Clearly just any arrangement would not do. Here is where the choices one makes reveal themselves as ideological. This political dimension to arrangements or choice, whether aesthetic or bureaucratic, brought me to thinking of the city as the nexus of the political. I see all objects as mute testimonies to economic and social relations in the city and that of course includes objects of art; it is part of their meaning, which cannot be ignored. This much is however obvious. What is more interesting is the question of how the internal dynamics arising from inter-objective relations can be externalized and what would be the forms that could accommodate this process. Here I need to mention that I use the word object in the broadest possible sense. A word is an object as well as a book, the institution that endorses the book and the table it is resting on, the signified as well as the signifier.

Some years ago I came across the catalogue of an exhibition by Robert Ryman in the Pace Gallery NYC in 1990. Yve-Alain Bois, the same person who wrote ‘Painting As Model’, wrote the introduction. In this text Bois writes about Robbe-Grillet and a question he posed back in 1958. “Is it possible to escape tragedy?” Bois quotes Grillet’s answer:
“Today tragedy prevails, extending throughout all that I feel and think; I am conditioned by it, from top to bottom…. I submit that this misery is situated in space and time, like all miseries, like all things in the world. I submit that one day man will free himself from it. But I have no proof of this future. For myself as well it is a wager. “Man is a sick animal,” wrote Unamuno in ‘The Tragic Sense Of Life’; the wager consists in thinking that he can be cured and that, in such a case, it would be inept to confine him to his ailment. I have nothing to lose. In any case, this wager is the only reasonable one.”

That was the late 1950s; the Algerian war and all the nastiness of Real Politic were in the air. But the question of ‘the tragic’ is something that still bothers me because I think even now it is everywhere around us and it goes to the heart of how we make representations in the social space be it as politicians, artists or even scientists. ‘The tragic’ is an illusion, a deferral. It is existential and psychological. It is the view that considers life as absurd. It is the yawning abyss the soul feels when confronted with this absurdity. It is a disguised theophany. You have to believe in a god to feel it. Or you have to be very upset about not being able to believe in a god. It is a repressed ideology narrowly masked by the spectacle of postponement.

If there ever was a political project in art I think it is this: to continue to reject this tragic space in every way possible and to develop strategies to do this. But in order to start you have to believe that it is possible now. This is why irony doesn’t work. Also you need to have an alternative proposal. This ‘tragic space’ is nothing but a residue of an already defunct conceptualization of representation nevertheless it persists.

Peter Marcuse who is Herbert Marcuse’s son and an urbanist has said that the most urgent project today is that of owning the city of the future and he suggests the starting process could be summarized in the following way: expose, propose and politicize. This injunction does have some relevance to my thinking about art as well; an analytical art that doesn’t stop there but goes on to become propositional and to place this potentiality within the representational space of the city.