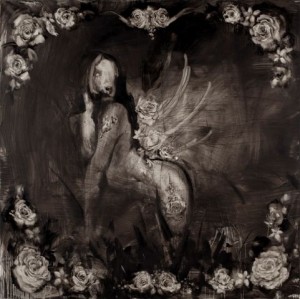 Becoming Animal sees the first solo show for the artist Antony Micallef in London in three years and his first anywhere since the epic sell-out exhibition ImpureIdols in L.A in 2007. This collection of work represents a new high water mark for one of the most talented artists of his generation both in terms of his exquisite technique and the challenging manner in which he creates intricately complex compositions. The paintings, drawings and collages in the show are built upon a profound belief in the act of painting and mark making – figures and faces loom through the veil of loose, confident, almost abstract brushstrokes and animals and humans merge in the happy accidents of the artist’s stream of consciousness. Inspired by anything from Pop Culture to Caravaggio, fashion magazines to Francis Bacon, this show comes as the result of a personal period of self examination, exploring the experiences of an artist in London through the sensations of light and dark mirrored in both his palette and his choice of imagery.

Following on from major contributions to the GSK Contemporary exhibition at the Royal Academy in 2008, Kevin Spacey’s show in London’s Tunnel 228 and successful projects with the Tate Britain, Antony Micallef is currently contributing to a travelling exhibition, Journey, in association with the UN, the Mayor of New York’s Office, Emma Thompson and the Roddick Foundation that highlights the horrors of sex trafficking. Through his often disturbing subject matter the images in this show depict the fine line between sensuality and discomfort, themes that dominate his work in a consistently powerful manner. As the artist says of his work; “often it is like watching a Disney movie that slowly transforms into violence and pornography and you don’t know how or when the change happens.”