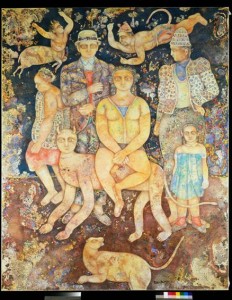 Endnote, by Ashish Avikunthak will be screened on the ground floor of the gallery. It is an 18 minute long, 16mm film that is based on the Beckett play Come and Go and set in Calcutta. Three women reminisce about their time at school and their old friendship with each other, however, each also shares a secret about the third, a secret that is never made known to the viewer…

Downstairs will be recent paintings by Sakti Burman. His work is strongly influenced by both the East and West – with inspiration from the elaborate boarders and calligraphy of Mughal manuscripts to the Italian frescoes. For the past 50 years, these influences have helped to mould Burnam’s individual style, in particular, his trademark speckled paint technique producing decorative and elaborate hues.