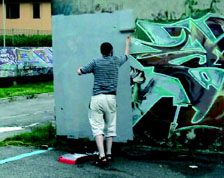 Seven artists with radical strategies for engaging with urban space present works specially conceived for A Foundation, London. The exhibition site, Rochelle School is a Victorian building located at the heart of the Boundary Estate Conservation Area, built in 1895 on a former shanty town. Following a brief summer research residency,
the site-specific works create dialogues with this historic area of East London, its cultural and social specificities, and the community that inhabits it.

In order to remap the aesthetics of the social, the project reclaims the street as a social point of encounter. It claims the particularities of the urban through the vision of seven artists’ projects, a series of challenges or future topographies beyond the boundary of gallery and locality, that address issues such as; globalisation, corporate identity and democracy. The result is an exciting remix of the vernaculars of street art to expose the architecture of memory and meaning.

‘It is our most extensive international exhibition to date in our London space,”says A Foundation’s Director Mark Waugh With ‘The Rooks Have Returned’ Elena Bajo plays with the re-reading of the social,historical and political layers woven into the neighbourhood’s fabric. Her intervention consists of a collective, performative installation of sculptures created from donated furniture from the area which has been upholstered using discarded old fabric from the shop of Master Upholsterer on nearby Calvert Avenue, who has been reupholstering
furniture of local neighbours for thirty five years.

Jacobo Castellano’s goal is to recognize the environment, to get into the skin of the archaeologist who is removing thin layers of soil to reveal the world. Each place has its own history and the objects that reside in its streets are a part of it. Through the objects found in any street of any town we can get an idea of the social, economic or
cultural reality that surrounds us; they are indeed living elements. In “La muerte de las cosas” (“The Death of Things”), after removing those objects from their environment, he invites them to dialogue in the exhibition space, where new meanings may arise. Meanings that can tell the reality as it is or distort it by creating multiple meanings. The outcome of these processes could be covered under the
generic title: “Death and Resurrection of the Living Object”.

As the title implies (Project to spread the message of an anonymous woman in…London with a punk band) Josechu Davila will spread the message – of a woman who he has been recording over a period of time. The daily speech of this anonymous woman who speaks to the world from her window in Madrid has been transcribed into English and transposed into song through a song composed specifically for this occasion with punk band “Short Bus Window Lickers”. The song
remains faithful to the idiosyncrasy of her message and will be performed from the bandstand of Arnold Circus on the opening night and broadcast in real time in the interior of the exhibition space.

With the video installation ‘Welfare State’ Democracia proposes a meeting between the integrated and the marginalized society at the time when the welfare state acts in search of justice and equality. Recently, the Community of Madrid and the City Council agreed to demolish one of the largest slum European settlements in Madrid:
El Salobral, consequently rehousing its inhabitants, the majority of whom are of the gypsy ethnic group. The installation conceives the staging of the demolition of this marginal community as a performance for all members of civil society. Over and above considerations such as the disappearance of specific cultural forms (that of the gypsy culture), the civil society celebrates the disappearance of the ghetto.
Maider López´s challenge is to transform the public space, and subtly modify the environment, creating new possibilities such as a soccer field painted at the Art Square in Sharjah Biennial, or a beach where everyone’s towel is in red colour. With Bidegorri López intends to change the colour of the bicycle path in Arnold Circus,
from green to red and converting it into a perfect circle around the place. The project is conceived not just for cyclists but also for those whom Arnold Circus represents part of their daily lives. All of a sudden, the local resident finds himself surprised when he sees the path transformed. It pays homage to the Boundary people, and
aims to question the meaning of colour in urban space.

Through this project, the artist comments on globalization in a subtle act of unifying languages and criteria, as well as emphasizing the originality of such a peculiar neighbourhood.

‘Citizen Identity’ is a two part project by PSJM, an artist collective conceptually focused on the representations of individual identity in consumer society. The first part is “Signatures Collected for Aesthetic Aims”, a street-art performance played by PR hostesses in corporate apparel, which comprised of the collection of a sample of citizens signatures in Shoreditch. From this raw material a selection has been
digitally manipulated through the application of colours and a prominent outline, turning these signatures into forms visually reminiscent of both commercial logos and the graffiti tags, probably the most ubiquitous symbols of popular culture. The second phase is the exhibition of these new ‘people´s brands’ inside A Foundation, installing them with vinyl on the wall and screening the video of; “Signatures Collected for
Aesthetic Aims”. So the project works inside and outside, in art and life.
Avelino Sala takes inspiration from Joseph Merrick – the elephant Man- to think about the psychogeography of the East End and how migration and remixing might define a nomadic icon of the area, a collage of the cultures and mix of traditions that coexist in this area. By taking photographs in the Boundary Estate of people of 23 different nationalities, Sala gives form through their sampled faces to the face of the new Elephant man. The image is also returned to the streets in the shape of stencils, on the walls of the neighbourhood where the photographs have been taken, paying homage to plurality.