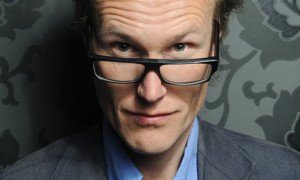 Will Gompertz. Photograph: Christian Sinibaldi
Will Gompertz, 44, the director of Tate Media, is predicted to become the next “star presenter” after being appointed the BBC’s first arts editor. Few in the art world would doubt that Gompertz is one of Tate’s most media friendly directors who is fully plugged into the arts scene.

Since 2006, he has overseen the Tate’s digital division and Tate Etc . He runs public events including the UBS Long Weekend Festival at Tate Modern.He is a board member of the campaign group National Campaign for the Arts and has written about the arts for more than 15 years. He founded Shots magazine in 1990 and has produced several programmes about the arts, the most recent being Taken For A Ride, a documentary for Channel 4.

His profile was further raised when he was voted one of the world’s top 50 creative thinkers by the New York-based Creativity Magazine and by his appearance at the Edinburgh Fringe Festival in his one-man show, Double Art History. He will take up his role at the BBC in the next few months.

“The creation of a new arts editor role for BBC News is part of the BBC’s deeper commitment to arts and music throughout 2010 with a wide range of initiatives aimed at supporting cultural Britain and better serving the public.”

Gompertz said: “It’s a great opportunity to be able to engage with a wide audience. It’s always useful for organisations to have multiple voices and view points within them so I hope I can offer that slightly different viewpoint.” Via (The Independent)

One thought on “Will Gompertz new Arts Editor for the BBC”