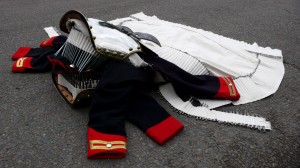 4 Sept- 4 October 2009
The hilarity at the core of Michael Lisle-Taylor’s work arises from a dance with military service that won’t let go. It’s an embrace that promotes its own laughter. It probes the interfaces of insubordination
while acknowledging that discipline encodes behaviour that prevails when rupture and trauma take hold. Men and horses get blown-up: humour anaesthetises, repels and provides a safe passage back to the problem.

What’s left in Lisle-Taylor when the laughter subsides? His skill for a start, which refers to his time in the service working with aircraft and weapons-handling equipment. He’s good at adapting Blues Ceremonial kit as well. His sewing is reliable and as matter-of-fact as his way of assembling his functional sculptures. Consequently the shredded uniforms, the dislocated flags, the themes of fragmentation and dispersal have the additional pathos of knowing how to destroy such well made things.

In ‘Omm Papa’, Lisle-Taylor contrasts the paraphernalia of childhood and play – rocking horse, roundabout, see-saw – to put on show the evidence of this violent protest.

In ‘Yeehaa’, Lisle-Taylor redirects the motif of the flag away from its modernist rhetoric and reclaims it as the emblematic device it always was. The work indicates the rituals played out with increasing regularity as troops are brought back from foreign service. The flags that cover military caskets are ceremonially folded in a particular way.

The fragments of Old Glory in this work are seen through a matrix of folds and cuts, packed into triangular containers and displayed in an inescapable reference to the diagonals of the Union Jack. Consequently the image settles on neither one but reflects the uneasy alliance between the two.

The shattered metaphors of ‘Omm Papa’ in consequence accrue problematic associations when American political equivocation and popular support for the IRA is factored in.

The 1982 Knightsbridge explosion is at the centre of this exhibition, but it conjures other reverberations from further afield. In 2008, Lisle-Taylor travelled to the Tien Shan mountains in east Kazakhstan in order to pick enough wild apples to make thirty litres of cider for his work ‘Diaspora’.

His theme is dispersal – not the dispersal that results from the detonation of malign devices but a more insidious permutation of knowledge. The Tien Shan apples are the apples of the original Fall,

the Garden of Eden Apples, the ones Milton discussed in ‘Paradise Lost’ – we learn also that this

beautiful region with its wild prelapsarian fruit became a nuclear testing range before the Soviet downfall. ‘Diaspora’ conveys its cargo of isotope-laden laughter that conceals its own warning but

– as with the compelling nature of the other pieces in this show – much of this particular hilarity carries with it its collateral of pain as well.