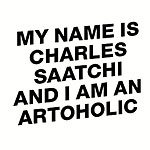 Damien Hirst has lost his touch and Nicholas Serota is a hero, says the famously secretive Charles Saatchi in a revealing new book in which he answers his critics.

Why has Damien Hirst lost his inspiration?
He is a deeply gifted artist, a genius among us, but he’s had a bad run of shows over the past few years. All great artists have an off patch, and he’s having his. Usually when that happens, artists try too hard and the results look effortful and overblown. But I’m sure his next show will be a winner.

What was your first break in advertising?
After being rejected for a copy test by J Walter Thompson, Young & Rubicam, Ogilvy & Mather, and failing at interviews, or to even get an interview at every other agency I could think of, I managed to wriggle my way into an appointment to see Jack Stanley, the creative director of Benton & Bowles. God knows why he agreed to see me, or what he saw in this gormless youth sat in front of him, but he was American, noted that I seemed mad about all things American and knew a little about American ads, and could start immediately. Literally immediately, because he promptly walked me down a corridor, told me he had hired another young trainee last week, and I was to work with him. Luckily for me the trainee was John Hegarty, and we hit it off, and even better he was very talented and I would look good bathed in his afterglow.
Via (The Evening Standard)

Matthew Collings has been an inspiration to me for many years and this interview has been a fantastic opportunity to cover his successful career in the arts.