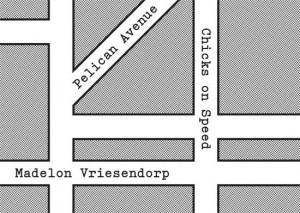 The group show Skyscraper takes its name from a novel written in the same year that the Empire State Building opened its doors. The novel is a romance tinged with feminist ambition and an homage to aspirational architecture – motifs that the artists here display a common regard for. Chicks on Speed, Madelon Vriesendorp and Pelican Avenue all share a fantastical approach to design that leads beyond utility towards the articulation of desire and absurdity. Far from the earnest pronouncements of 1970s feminism, Skyscraper is a joyous declaration of independence from conservatism, logic and category distinction.

Chicks on Speed present two new hats, made in collaboration with designer Christophe Coppens and based on illuminated drawings of Hildegard von Bingen, a 12th-century Christian mystic who received visions, composed ethereal airs, performed healing and even founded convents. These hats transmit the utterances of their wearers by way of microphones and speakers: the contemporary beatified woman can amass her own power tools, it seems.

Madelon Vriesendorp has a foot in both the art and architectural camps, which she bridges with her series of paintings of anthropomorphised buildings lying spent in bed. Vriesendorp’s installations, comprising cardboard constructions and found objects, seem to fuse the rarefied metaphysical potential of Giorgio de Chirico with the unlimited facture of the popular imagination. She has collected postcards and objects over the years that have now amassed into a kind of ‘super-painting’ or ‘Archival Tablescape’, as architect Charles Jenks describes these vistas. It presents a new world in miniature, ordered by way of very personal classification criteria.

Pelican Avenue was founded by Antwerp-based fashion designer Carolin Lerch. Her clothing, while distinctly wearable, evokes an anachronistic sense of decadence where time, craft and plenitude signal a stand against streamlining. For ‘Skyscraper’ Lerch has made a wall hanging from printed fabric that, while suggesting computer-generated imagery, seems to describe a plan for the fantastical realm of an enchanted forest or a lost city.

CHICKS ON SPEED (Melissa Logan, born USA 1970 lives and works in Hamburg and New York/ Alex Murray-Leslie, born Australia 1970 lives and works in Barcelona/ Anat Ben-David, born Israel 1970 lives and works in London/ Kathi Glas born Germany, 1977 lives and works in Berlin/ A.L. Steiner, born USA 1967 lives and works in New York) have exhibited and performed internationally in institutions including MoMA New York, Centre Pompidou, Paris and Tate Britain, and last year had solo shows at Kate MacGarry and at The Museum of Modern Art, Kyoto. They have frequently collaborated with other artists, fashion designers, musicians and filmmakers such as Jean Charles de Castelbajac, Douglas Gordon, Karl Lagerfeld, Jeremy Scott, Deborah Shamoni and Lisa Walker. Chicks on Speed: It’s A Project was published in 2004 by Booth-Clibborn Editions; a second publication is due next year. They are also developing a solo exhibition with Dundee Contemporary Arts for late spring 2010.

MADELON VRIESENDORP (born in Holland, 1945, lives and works in London) co-founded the Office for Metropolitan Architecture (OMA) in New York in 1970s with her partner Rem Koolhaas. Her paintings have illustrated books and magazine covers – most notably Rem Koolhaas’s 1978 Delirious New York- and she has produced drawings and models in collaboration with architect Charles Jencks, the architectural publications Domus and Abitare and her daughter Charlie. Her work has been shown in New York at The Guggenheim and Max Protetch Gallery, Centre Pompidou in Paris, Stedelijk Museum in Amsterdam. She had solo exhibitions at the Architectural Association in London in 2008 and the Swiss Architecture Museum, Basel in 2009. Her work is also included in Making Worlds, at the 53rd Venice Biennale until November. The World of Madelon Vriesendorp was published in 2008 by AA, edited by Shumon Basar and Stephan Trüby.

PELICAN AVENUE is a fashion label started in 2004 by Carolin Lerch (born in Austria, 1975 lives and works in Antwerp). Lerch graduated from the Royal Academy of Fine Arts in Antwerp and went on to work with fashion designer Bernhard Willhelm. Her pieces are conceived as both artworks and wearable clothes and are presented within a variety of media such as video, photography, performance and installation, often collaborating with multimedia artist Michiel Helbig. Pelican Avenue regularly exhibits at Paris Fashion Week and Lerch’s work has been shown during the Fashion Biennale 07 in Arnhem, the 7 Fashion Festival 07 and PARK, both in Vienna, at Arteleku in San Sebastian and the W gallery in Antwerp.