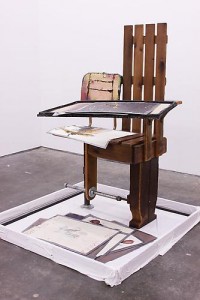 The performance is in conjunction with BLOOD DRIVE, an exhibition curated by Kate Levant.