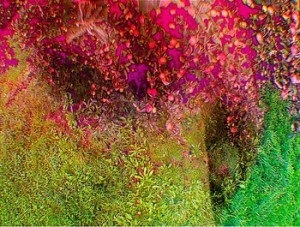 Pipilotti Rist will create a kind of domestic fantasy for her exhibition at Hauser & Wirth Zürich. The ground floor galleries will be transformed by the artist into her dream living room — a space whose walls, floors and furnishings are alive with images. Rist’s video installations take many guises. She has likened them in the past to handbags, ‘because there is room in them for everything: painting, technology, language, music, lousy flowing pictures, poetry, commotion, premonitions of death, sex and friendliness.’ From this versatile, capricious medium Rist draws inner and outer worlds of kaleidoscopic colour and wonderment.

Lightboxes, intricate ‘video-objects’ and still images printed on a variety of materials in the room fabricate a multi-layered interior: a living space which opens itself up to reveal other vistas. Within this she creates an arena in which the viewer is invited to dance. Music and light effects cohabit with domestic furnishings to form a ‘living room disco’ — a concept that the artist would like visitors to apply to their own homes. Her art conjures positive energies that bring about social change, dissolving the boundaries between public and private space. that bring about social change, dissolving the boundaries between public and private space. The imagery in the installation originates from footage the artist shot during the making of her first feature film Pepperminta (2009), which will be launched in Switzerland in September. It is as if, Rist has said, ‘the film came into the room and deposited itself within.’ This pollination of a screen fiction into the viewer’s physical surroundings is typical of her works which marry visual with haptic experiences and impart intellectual discovery through the senses. ‘I treat artworks as philosophical statements themselves,’ Rist has said, ‘expressed in a tool other than language.’

Pleasure and humour are central to Rist’s work. Her heroine Pepperminta is an indomitable being who aims to free the world of fear. The bodies in her films are enticingly free. That they are female and often her own, turns the viewer into voyeur. Titles are propositions and incantations, encouraging a fuller engagement with life: the gigantic immersive installation Pour Your Body Out (7354 Cubic Metres) (2008 – 2009) solicited and received physical participation from the thousands of people who visited it in MoMA’s Marron Atrium. Operating on an entirely different scale, in this exhibition Enlight My Space (2008), a shelf filled with bric-a-brac, is intimate and fragile, incorporating a book laid open at a cross-sectional illustration of a pregnant woman; its title combining with the piece’s material components and flickering projected image to form a tender meditation on how what we let inside can utterly transform one’s life.

Large or small, unifying or splintering into a host of different elements, Rist’s installations are expansive, finding in the mind and body the possibility of endless discovery. She explains: ‘The idea is that now we’ve explored the whole geographical world, pictures or films are the new, unexplored spaces into which we can escape.’

The feature film Pepperminta will be launched in cinemas on 10 September. For full film credits, please visit www.pepperminta.ch.

Pipilotti Rist (b. 1962) lives and works in Zürich and the mountains of Switzerland. Since emerging on the international art scene in the mid-’80s, Rist has had numerous solo and group exhibitions and is one of the most celebrated video artists working today. In 1997 she was awarded the Premio 2000 for outstanding achievement at the Venice Biennale for her audio video diptych, ‘Ever is Over All’ (1997). She represented Switzerland at the 51st International Biennale di Venezia in 2005. Recent solo presentations of her work include ‘À la belle étoile’, Centre Pompidou, Paris (2007); ‘Gravity Be My Friend’, Magasin 3 Stockholm Konsthall (2007); ‘YuYu’, MIMOCA Marugame Genichiro-Inokuma Museum of Contemporary Art (2008); ‘Pour Your Body Out (7354 Cubic Metres)’, MoMA, New York (2008 – 2009); and ‘Elixir: the Video Organism of Pipilotti Rist’, Museum Boijmans Van Beuningen, Rotterdam (2009), which will travel to KIASMA Museum for Contemporary Art, Helsinki, in September. An exhibition at Paço das Artes and MIS Museu da Imagem e do Som, Sao Paulo, opens in October. She recently was awarded the Joan Mirò Prize 2009 for her wide-ranging creative activity and her outstanding contribution to the current artistic scene.