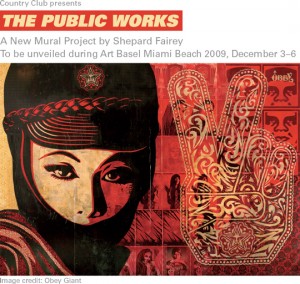 As part of the programs surrounding Art Basel Miami Beach this year, Shepard Fairey will unveil a major new mural consisting of a barricade structure covered with paintings. Located at The Fountainhead Residency property, an artist’s studio program in a residential-neighborhood of Miami, the site will be an unexpected venue for Fairey’s work. The artist’s typical approach to placing his images involves urban explorations of neglected, unclaimed or interstitial sites. The blank canvas of the barricade will provide a significant expanse for Fairey to develop a cohesive series of images. The project is being produced by Country Club, a gallery with locations in Los Angeles and Cincinnati, in partnership with the Miami Art Museum and The Fountainhead Residency.

Shepard Fairey is one of the most visible and celebrated artists of his generation. Fairey first gained notoriety by translating pop culture imagery into guerilla propaganda campaigns that quickly became global phenomena, most prominently with his ubiquitous “OBEY” images. Fairey’s recent work consists of complex, multi-layered portraits of counter-cultural revolutionary figures combined with politically-charged propaganda style imagery. Fairey’s image of Barack Obama propelled him toward widespread international acclaim when the stylized portrait of the presidential candidate with the word “HOPE” became the most recognizable image of the 2008 elections and a survey exhibition of his work was organized at the ICA Boston in early 2009.
Via (Artobserved)