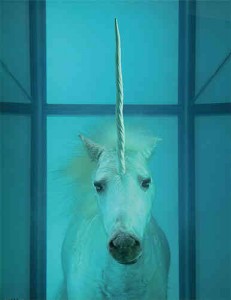 Tate announced yesterday that Damien Hirst’s large vitrine work, The Child’s Dream 2008, will go on show at Tate St Ives this autumn. The work, which comprises a ‘unicorn’ in a gold-plated vitrine of formaldehyde, will be one of the highlights of the exhibition The Dark Monarch: Magic and Modernity in British Art opening on 10 October 2009. The Child’s Dream 2008 has never been displayed in the UK before. It will also be the first time a major Hirst piece has been shown in the South West, home to the artist.

Displayed in the Heron Mall, the dramatic first gallery at Tate St Ives, The Child’s Dream 2008 will create a magical beginning to the group exhibition, The Dark Monarch, which takes its title from the infamous 1962 book by St Ives artist Sven Berlin. The exhibition will explore the influence of folklore, mysticism, mythology and the occult on the development of art in Britain. Focusing on works from the beginning of the twentieth century to the present day it will consider, in particular, the relationship they have to the landscape and legends of Britain and Cornwall. It will examine the development of early Modernism, Surrealism and Neo-Romanticism in the UK, as well as the reappearance of esoteric and arcane references in a significant strand of contemporary art practice.

Martin Clark, Artistic Director at Tate St Ives, said: “I am incredibly pleased that The Child’s Dream by Damien Hirst will be shown at Tate St Ives this autumn. The unicorn is a powerful symbol of good in early pagan mythology and is still associated with fairytales and the mystical landscapes of King Arthur in Britain and Cornwall. Hirst’s exploration of this beautiful, but unreachable beast will be a great opening to our major exhibition The Dark Monarch.”

Damien Hirst said: “It’s great to be showing The Child’s Dream at Tate St Ives. The work really lends itself to the themes of The Dark Monarch. Children’s dreams are more fantastical than adult’s dreams and as the sculptor Constantin Brancusi said, when we are no longer children we are already dead.”

Damien Hirst’s wide-ranging practice, which includes installations, sculpture, painting and drawing, has sought to challenge the boundaries between art, science and popular culture. His vitrine pieces in particular, such as Mother and Child Divided 1993, recast fundamental questions concerning the meaning of life and the fragility of biological existence.

Damien Hirst was born in 1965 in Bristol, UK. He lives and works in London and Devon. He has participated in numerous group exhibitions including Into Me / Out of Me, P.S.1 Contemporary Art Center, New York (2006), In-A-Gadda-Da-Vida, Tate Britain, the 50th Venice Biennale (2003) and Century City, Tate Modern (2001). Solo exhibitions include Astrup Fearnley Museet fur Moderne Kunst, Oslo (2005), Museum of Fine Arts, Boston (2005) and Archaeological Museum, Naples (2004). He received the DAAD fellowship in Berlin in 1994 and the Turner Prize in 1995.