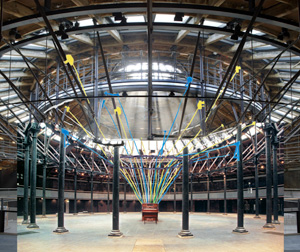 David Byrne has turned The Roundhouse into a giant musical instrument which members of the public will be invited to play. An old pump organ will be set at the heart of the Main Space with a series of cables and wires attached to the building’s structure – metal beams, pillars and pipes – which will make the different elements vibrate, resonate and oscillate.

Artist/musician David Byrne has created public art installations in New York, Toronto, Tokyo, Sydney, Valencia, Stockholm, Belfast and San Francisco, and has been publishing and exhibiting his work in galleries and museums internationally for the past two decades. He’s well known as co-founder of the group Talking Heads (1976–88).

“Typical parts of buildings can be used to produce interesting sounds. Everyone is familiar with the fact that if you rap on a metal column, for example, you will hear a ping or a clang, but I wondered if the pipes could be turned into giant flutes, and if a machine could make girders vibrate and produce tones.”

“David is most widely known as a musician, but he is an extraordinary writer, visual artist, and director who resists categorization, plays around with grey zones, and favors a life of broad creativity,”

says Anne Pasternak, curator of the exhibition and President and Artistic Director at Creative Time.

“Playing the Building is deceptive in its simplicity; it’s layered with rich meaning relating to human nature, our contemporary relationship to place and sound, and considerations of shifts in culture at large.”

Playing the Building was originally presented and commissioned by Färgfabriken, Stockholm in 2005.

Since the early days of his practice, Byrne has been a dynamic force in public space, having installed artworks in Belfast, Toronto, Stockholm, San Francisco, Tokyo, and Sydney. Byrne first collaborated with Creative Time in 2002 by creating a sound installation at the World Financial Center in downtown Manhattan as part of the exhibition Sonic Garden, with Laurie Anderson, Marina Rosenfeld, and Ben Rubin. Byrne is internationally renowned as the co-founder of the groundbreaking Talking Heads (1976-88)—a band that took popular music in new directions—and has won Grammy, Academy, and Golden Globe awards for his music. He has been creating book projects and exhibiting his visual artwork for more than a decade.