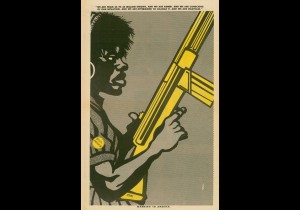 Emory Douglas, June 27, 1970. Offset lithograph. Collection of Alden and Marty Kimbrough. © 2009 Emory Douglas / Artists Rights Society (ARS), New York
The New Museum will present a major survey of works by Emory Douglas made while Douglas was the Revolutionary Artist of the Black Panther Party and subsequently,its Minister of Culture. “Emory Douglas: Black Panther” will be on view in the second floor gallery from July 22 through October 18, 2009.

Douglas created the overall design of the Black Panther, the Party’s weekly newspaper, and oversaw its layout and production from 1967 until it ceased publication in 1979. Douglas created a straightforward graphic style and a vocabulary of images that would become synonymous with the Party and the issues it fought for.

Selected by the Los Angeles artist Sam Durant, whose work often deals with political and cultural subjects in American history, the exhibition includes more than 155 posters, newspapers, and prints
dating from 1966 to 1977, as well as a small-scale mural that reprises one of Douglas’s vintage images.

In Durant’s opinion, this exhibition is not only a retrospective of Douglas’s artistic achievement; it is a primer on how art can encourage political consciousness and function within an activist context. That this graphically alive, politically focused visual art is also completely relevant to contemporary art practices is demonstrated by its influence on the work of artist Rigo 23, who will execute the mural in Douglas’s show in addition to his own site-specific installation which will be simultaneously on view in the New Museum’s Shaft Gallery.

Douglas will give an artist talk, introduced by Rigo 23, on July 23 at 7 p.m. in the New Museum theater. Sam Durant met Emory Douglas in 2002, and began creating a book of Douglas’s work, which resulted in a monograph published in 2007. The same year Durant curated “Black Panther: The Revolutionary Art of Emory Douglas” at the Museum of Contemporary Art in Los Angeles. The exhibition at the New Museum is organized by Laura Hoptman, Kraus Family Senior Curator,with Amy Mackie, Curatorial Assistant.

Between 1966 and 1980, the Black Panther Party built an international organization of over 5,000 members. With chapters in cities across the country, after 1968, the Party’s focus expanded from self-defense to community service and social-welfare programs including, free breakfasts for children, free health clinics, and charter schools, among others. The Party also built coalitions with churches, labor unions, and a variety of multiethnic political groups, and by 1970 was fielding candidates for city, state, and national offices. Douglas’s work gave visual form to many aspects of this extraordinary history.

At its height, the Black Panther had a circulation of 400,000. Early examples of Douglas’s lively and incendiary graphic compositions sought to inspire the African-American community with representations of proud and defiant black men and women and trademark ironic caricatures of racist abusers of power. The pig, which became the predominant avatar for authority, is among the best known of Douglas’s motifs, along with the stalking panther and the clenched black fist.

Later works feature representations of community pride, economic development, and the positive results of the Party’s many social programs. Douglas also produced portrait posters that portrayed many of the most important public figures of the 1960s, including Richard Nixon, Henry Kissinger, Amiri Baraka, and Malcolm X. While Douglas’s work was focused on the struggle for African-American civil rights, it also took as its subject anti-colonial struggles around the world. By the early ‘70s, many of Douglas’s works expressed the Black Panther Party’s solidarity with analogous international groups dedicated to political and social reform, and exhibited formal affinities to protest graphics produced at the time in Cuba, the People’s Republic of China, North Vietnam, and Africa.