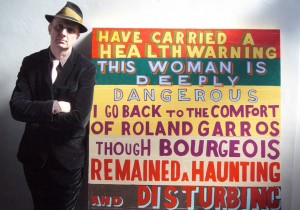 Bob and Roberta Smith (b. 1963, age 46) lives and works in London. He studied at the University of Reading and Goldsmiths College London. The artist invites us to question high art, and the role that aesthetic elitism has to play in society today. At the core of his practice Bob and Roberta Smith asserts that art can and should be an essential tool in the democratic process. He shows work internationally, with recent shows in Italy and the United States, and at Tate Britain. A major work entitled This Artist is Deeply Dangerous will be shown as part of the Edinburgh Arts Festival this summer.

Wolfgang Tillmans (b. 1968, age 40) is a German artist who lives and works in London and Berlin. He studied at Bournemouth and Poole College of Art and Design. He was first recognized in the early 1990s for his affecting and unconventional images of friends and other young people in his social circle. Since then Tillmans’s subject matter has broadened combining portraits, still-lifes and landscapes with abstract and sculptural photographic works hung in carefully considered wall installations. This fusion of different photographic practices and a continuous production of artist books is spurred by his personal experiences of life and a strong political engagement. He won the Turner prize in 2000.

Earlier this year, Tate accessioned Humiliate 1993 by Bob and Roberta Smith. This will be included in those acquisitions which are published in 2009/10 Annual Report in September 2010. The acquisition was approved in July 2007, in advance of the Trustee application process.

Tate shops currently stock diaries and calendars using an image by Bob and Roberta Smith, having bought the rights, and also a print on which the artist receives a royalty on sales. Tate Enterprises also expects in July to buy the rights to a set of building blocks designed by the artist, and to a Christmas card design. These commercial interactions were initiated in advance of the Trustee appointment process, and his role as a potential trustee has played no part in them. Any conflict of interest arising out of these or any other commercial interactions will be managed in accordance with Tate’s policies which have been drawn up in consultation with the Charity Commission. The Charity Commission has been fully informed of this case, and is satisfied with Tate’s proposal for managing it as a formally recorded Trustee Benefit.

The appointment process has followed the OCPA Code of Practice. Appointments are made on merit and political activity plays no part in the selection process. However, in accordance with the original Nolan recommendations, there is a requirement for defined political activity in the United Kingdom in the past five years (if any declared) to be made public. The new Trustees have declared no such political activity.