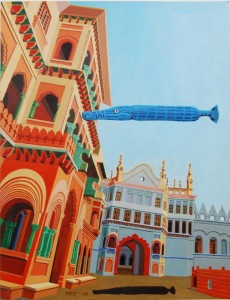 Thursday, July 16th, 2009 | 6:30 – 9:00 pm
‘Space Invader’ is a group exhibition that explores the way the spaces that surround us become crowded, polluted, confused and filled. It brings together seven artists from around the world, but instead of celebrating the golbalized sphere of cultural or economic production, it attempts to pause and reflect what is being lost, as much as what is being gained.