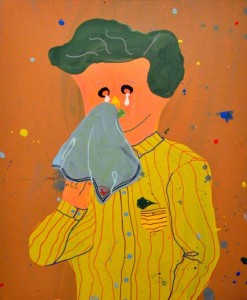 Well, since my baby left me,
I found a new place to dwell.
It’s down at the end of lonely street
It’s called Heartbreak Hotel.

Summer of ’09: Good news and bad news. Obama has launched the first six months of his presidency, the withdrawal of troops from Iraq is underway, healthcare reform is imminent, the CIA-Cheney torture practices are being investigated, the Bush era–by most accounts–appears to be over. On the other hand the economy is still in shambles as the credit crisis has not been resolved, the contemptible bailouts of the corporate giants continue, and joblessness has ascended to record levels. The art market has been deeply impacted by the economic downturn. However, there is light at the end of the tunnel, and Freight + Volume is proud to announce Heartbreak Hotel, our summer group show featuring new work from twenty-one artists. More than half a century after Elvis’ classic song, invited guests check in alongside gallery regulars for dialogue, commiseration, and solidarity in the face of the change-up of the world as we knew it. Such a gathering reconfigures wasted time into creative possibility; evident in each of these artists’ works is the knowledge that every setback is an opportunity for renewal, every regression the beginning of the next adventure. Freight + Volume humbly provides the space for this “downtime”, offering a refuge where artists and gallerists alike may regroup, rethink, and recreate their identities, providing a platform–a kind of “halfway house”–that offers stability and in turn, fertility.

Indeed, the correction the art world is experiencing, which mirrors the rehabilitation of the nation as a whole, is an opportune time to regenerate and create a healthier path forward. When we fly too close to the sun, a plunge back to reality is inevitable. Yet maturity tells us that heartbreak is necessary and edifying, that scrapes come with lessons, and from those lessons new perspectives arrive to recharge the mind, body and soul. Danial Nord’s video work, for example, frames this succinctly: The End is a beginning. Via acute repetition and anticipation, Nord’s sampling techniques inform us, also, that for some institutions the end comes none too soon.

Misaki Kawai’s Sad Boy, an emotional centerpiece for the exhibition, personifies the spirit of “Heartbreak Hotel” as it presents a sadness and optimism both undeniable. Kawai’s painting is simultaneously a salve to the brokenhearted and an accomplice to the merry, a vibrant recipe for all occasions. Peter Hutchinson’s Wallflowers presents a subtler opportunity to survey the union of loneliness and humor so frequently on display in “Hotel.” Here, Hutchinson’s expertly wrought text plays with and against both title and image, as he “reflects less on the feelings of the rejected and more on the beauty of the underappreciated.” As in Magritte, title, image and phrase begin a sly game of pointing to themselves and each other in an affable labyrinth of entendre. Speaking of pointing, Michael Scoggins, in his inimitable straight-shooting manner, deftly sums up the emotional tenor of the show with You Make Me Sick.

Necessarily, nostalgia plays a strong role in any undertaking of reflection. But rather than wallowing in self-pity, many of the “Heartbreak Hotel” artists bend nostalgia to new and surprising evocations, as in Annamarie Ho’s Majestic Hosiery #2, a masterful study of allure and its sources, the hard side to a soft industry. In his chalkboard photographs, Daniel Ranalli’s I Have Lost traverses structure, memory, and erasure as he explores what it means to remain. Meanwhile, Eric White’s cunning trompe l’oeil acts as lure and hook, invitation followed by prank; this concept is also evident in Andrew Guenther’s ironic take on room service.

And though its always crowded,
You still can find some room.
Where broken hearted lovers
Do cry away their gloom.

While the components of “Heartbreak Hotel” differ widely in their medium, style and approach, the end result is a a far-reaching, galvanizing conversation that propels us confidently into the next chapter. And though “Hotel,” like the world, is never one thing, identities remain solidly intact, telling us that together we are alone, alone we are together.