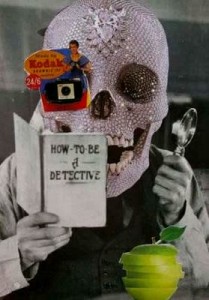 Just spotted this over at Paul Baines hadn’t heard anything about Damien Hirst suing someone , I agree a bit over the top from Damien I think ….

This isn’t exactly the gun fight at the O.K Corral, more like handbags at dawn, but a very rich man and a poor kid are having something of a tiff and in truth I doubt it’s doing either much harm – publicity-wise that is. The man is none other than Damien Hirst, an artist wealthy beyond the dreams or most mere mortal artists. The kid, is a lad called Cartrain, with aspirations of becoming the next Banksy, not so much for his art work as his stunts. Art stunts. I say good luck to the guy, he’s slowly picking up a following from this tactic, not my favourite of his, but all in all, if it gets him noticed good on him.

More: (Paul Baines)
Actually just checked and the story has been around for a while;
Hirst demands share of artist’s £65 copies (The Independent)
Damien Hirst ‘threatened to sue teenager over alleged copyright theft’ (The Daily Mail)

However there is help for Cartrain
The story involving Damien Hirst and his copyright infringement allegations against a 16 year old street artist– known as Cartrain– has taken a twist. Several influential UK artists have joined forces in order to defend Cartrain. (KLF.de)