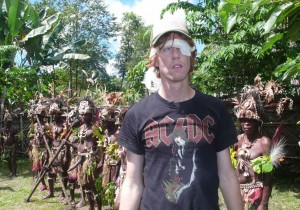 Contemporary Art Manchester is a new, not-for-profit consortium of visual arts organisations, comprising of established, high-profile partners, independent galleries, young artist-run projects and curatorial agencies, representing the breadth of the current arts infrastructure in Manchester. Trade City is the first of its kind in Manchester – a multi-dimensional exhibition bringing together the art production of thirteen diverse organisations. Centred on the notion of ‘trade’, the exhibition reflects the trading and exchange that has taken place between the artists and curators partnering in the CAM consortium. This alternative economy draws reference from the city’s pioneering economic heritage and proposes through Trade City an innovative approach to displaying the social transactions of contemporary art.

Each participating organisation has selected artists to exhibit work by, exploring multi-faceted interpretations of ‘trade’, alongside being representative of the type of work each organisation would normally produce or profile. Consequently, the presented works trade off each other in one space, supporting the work of twenty-six emergent to established artists, and addressing ideas of cultural, economic, geographical and political exchange.

100th Monkey reveal the co-existence of work-life and real-life through objects collected by local artist Chris Butler during his day job as a freelance technician in the city’s galleries. BMCA exhibit David Cochrane’s film To Escape From The Sun, which brings together 100 narrators to read the 1942 Camus’s novel L’etranger (The Outsider), whilst Bureau presents work by Olaf Breuning; a tongue-incheek anthropological study and travelogue, addressing ideas of tourism and Westernisation, often with absurd and hilarious results.

Over sixty artists and artist-run projects display work in car-boots as an alternative exhibition space through Contents May Vary’s Antifreeze event, and a set of dining experiences offer an equivalent form of exchange with Chipboard Project in collaboration with Gymnasium. Andrew Bracey’s works are presented by Castlefield Gallery, exploring the expanded field of painting and utilising existing sites and the readymade as alternatives to the canvas support, creating tensions between the handmade and the man-made. Exocet’s selection includes work by Ruth Claxton, who reconfigures preexisting objects in order to create new versions that question what it is to look, see or experience.

FutureEverything show artist Aaron Koblin’s Flight Patterns, a stunning visual animation of the path of thousands of aircraft in airspace, alongside Interval’s presentation of One Lime Street by Rose Butler and Kypros Kyprianou, a series of parallel journeys that through video heavily manipulate perspective. Becky Shaw and Islington Mill Art Academy present the first fruits of an ongoing collaboration documenting the exchange visits between the artists’ home cities, and leaving the Academy responding to a set of instructions Shaw has left them.

In collectively working on an exhibition and presentation formats CAM will test the ways in which contradictions or tensions and harmonies can co-exist within such a framework, and in the case of Trade City, under one roof. Unpicking, critiquing, and sharing working methodologies and creative processes, the diverse and multi-disciplinary approaches from the represented partners will create engaging connections, seeking to push the boundaries of curatorial practice.