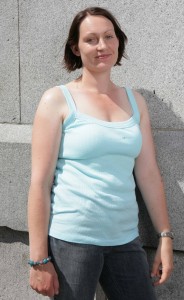 Rachel Wardell will be the first person to step onto the plinth at 9am on Monday 6th July, and wants to raise awareness for the NSPCC A housewife from Sleaford, a nurse from Brighton, and a Sri Lankan student
from London will all take their places on the Fourth Plinth in Trafalgar Square on Monday 6th July

Rachel Wardell, a 35 year-old housewife from Sleaford in the East Midlands will be the first participant on the plinth for Antony Gormley’s One & Other it was announced today, Thursday 2 July 2009.

Rachel will take her place on the Fourth Plinth in Trafalgar Square at exactly 9am on Monday 6th July and remain there for one hour. Rachel will be followed at 10am by Jason Clark, a 41 year old a nurse from Brighton. Other plinthers on the first day include Jill Gatcum, a 51-year-old consultant from London, Suren Seneviratne, a 22 year-old Sri Lankan student and artist, and Ishvinder Singh Matharu, a 31-year-old optometrist from Chigwell.

The project, which is commissioned by the Mayor of London and produced in partnership with Sky Arts will see a different person take their place on the Fourth Plinth every hour, 24 hours a day for 100 days and will commence on Monday 6th July at 9.00am.

Open to everyone over the age of 16, One & Other has received 14,500 applications to date from all over the country and from people of all ages, backgrounds and cultures, Drawn from as far afield as Coleraine, N.Ireland to the Norfolk coast, and Paisley in Scotland to the West country, July’s 615 participants are aged from 16 to 83, and also include a wheelchair-bound pensioner from Oxford, an aquatic scientist from Birmingham, and a English teacher from London for whom Trafalgar Square holds a special place in her heart. Applications for the project are still open and can be made at www.oneandother.co.uk, or through the post.
Antony Gormley’s One & Other Fourth Plinth project is commissioned by the Mayor of London and produced in partnership with Sky Arts. Sky Arts will go live from the plinth on 6th July at 8.30am, broadcasting a 24hr feed
on www.oneandother.co.uk. A weekly programme will also go out on Fridays at 7pm from 10th July on Sky Arts 1 and Sky Arts 1 HD.