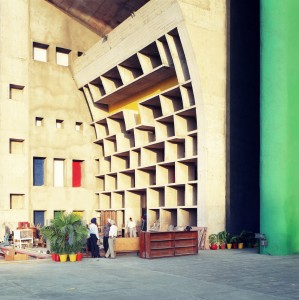 Entrance The High Court Chandigarh. Copyright Mats Eriksson20 June – 12 July 2009 PREVIEW 19 June, 6 – 9pm www.p3exhibitions.com
‘I say it with pride. Finally here at 67 years of age …I was able to erect an architecture which fulfils day to day functions but which leads to jubilation.’

This summer, the vast underground exhibition space P3 presents the first public display of a unique private collection of 1950s furniture designed by two heroes of the modern movement, Le Corbusier and Pierre Jeanneret. The Furniture of Chandigarh opens on 20 June 2009.

At the end of the Raj and following the partition of India, Le Corbusier and his collaborator Pierre Jeanneret were commissioned to design Chandigarh, a new city at the foothills of the Himalayas. This gave them the opportunity to realise their ambition of designing a total environment, and they created a city recently described by Jonathan Glancey in The Guardian as ‘one of the world’s most distinctive and beguiling places’. They designed infrastructure, landscape and buildings, working at all scales from the master plan down to the tiniest detail of interiors and furniture.

This lesser known furniture from Chandigarh reveals Le Corbusier and Jeanneret’s move to ever simpler, non-mechanically made, hand crafted pieces. In a departure from their earlier aesthetic of mass produced tubular steel furniture, the Chandigarh items demonstrate a ‘mass-individuality’, as no two pieces are identical. The exhibition features symbolic and monumental pieces from the Capitol Complex, alongside more utilitarian items. Recreating sections of Chandigarh’s Palace of Justice, the exhibition explores the new aesthetic the designers acquired in contact with the local culture and brief.

The exhibition is the culmination of a five year project by the owners of the collection that started with the discovery of the discarded furniture. After salvaging the pieces, they embarked on a passionate journey to research, catalogue and restore the collection.

Photographs by Swedish photographer Mats Eriksson feature in the exhibition. Also showing are two films: Chandigarh – From a New Architecture, filmed and produced by Ultrafunction and edited by Rahat Kulshreshtha in 2009. Capturing the spirit of the city as it is today, it reveals how the inhabitants have re-appropriated Le Corbusier’s grand project. It is seen alongside Alain Tanner’s celebrated 1966 film Une Ville à Chandigarh.

The exhibition is commissioned and funded by Ambika P3 and curated in association with the owners of the collection in the P3 Exhibition space.

P3 is a 14000 square ft exhibition space developed from the vast former concrete construction hall for the University of Westminster’s School of Engineering. It has recently been described as ‘One of the capital’s hidden and most exciting new spaces’ by The Guardian. The Ambika P3 programme commissions artists and researchers across creative disciplines, particularly those developing large-scale installations and prototyping, where full advantage can be taken of the large and accessible space.