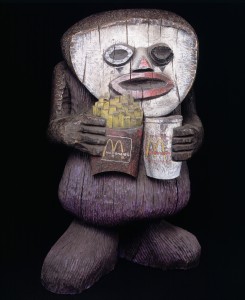 Image credit:Jake and Dinos Chapman Chapman Family Collection (Detail) 2002 © The Artist
Photo: Stephen White Courtesy Jay Jopling/White Cube (London)
Tate Britain, Linbury Galleries
Recent major acquisitions of British contemporary art will go on display in the BP Exhibition Classified, opening at Tate Britain on 22 June 2009. This free exhibition will include large-scale works from Tate’s collection. Using a wide range of media, Classified will feature new acquisitions which will be on display at Tate for the first time, such as Jake & Dinos Chapman’s Chapman Family Collection 2002 and two works from Damien Hirst’s recent gift to Tate: The Acquired Inability to Escape 1991, one of the artist’s early vitrine works, and Life Without You 1991.

Classified will focus on the way artists use ordering systems in their work, exploring how our need to classify affects our perception of the world. The exhibition will address this desire to collect, order and categorise, and will show how artists often use these networks and relationships in ways that reveal the inherent instability of meaning. The works in this exhibition employ a variety of methods and approaches, but are united by the artists’ engagement with the ways we all codify the objects and images that surround us as part of our daily life.

Familiar works such as Damien Hirst’s room installation Pharmacy 1992, Simon Patterson’s Great Bear 1992, a reconfigured version of the iconic map of the London Underground, and Mark Dion’s Tate Thames Dig 1999, which groups together objects found on the banks of the River Thames, will be shown alongside works that have been acquired over the last five years. This is the first time that many of these will be on display at Tate, including installations such as Simon Starling’s Work made-ready, Les Baux-de-Provence (Mountain Bike) 2001, Jake and Dinos Chapman’s Chapman Family Collection 2002, Tacita Dean’s film portrait Michael Hamburger 2007 and Rebecca Warren’s sculpture In the Bois 2005. All these works allow the visitor to reflect not only on the artists’ construction of meaning by their use of different strategies of classification but also on the museum’s role in collecting, cataloguing and displaying objects.