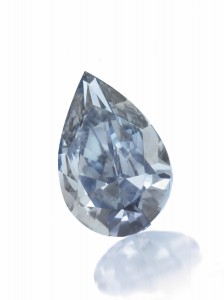 Christie’s announced that the New York Jewels Sale on June 11 will be led by four blue diamonds. Following the record sale of the 17th century historic Wittelsbach diamond -the 35.56 carat blue diamond that set the record for the most expensive jewel ever sold at auction at $24.3 million at Christie’s London in December 2008 – the market for blue diamonds is vibrant.