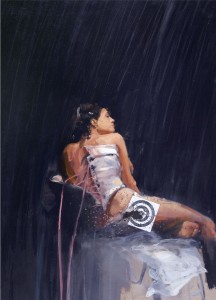 Charming Baker. He is having a solo exhibition calledl The Meaning Of Everything at the Gallery on Redchurch Street, E2 from 5-14th June. Preview night is on 4th June.
Charming Baker paints in oil. A graduate of Central St Martin’s, he is one of the UK’s most exciting emerging artists. He has shown in London, Los Angeles, San Francisco and Miami and will be having a solo show in New York in October.