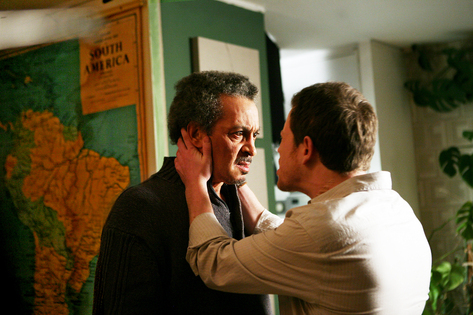 As the title suggests, von Wedemeyer’s work also explores the notion of the ‘fourth wall’, the imaginary divide in theatre which allows the audience to believe that what they see is real, whilst simultaneously enabling the actors to disregard the presence of the audience. Here, the ‘fourth wall’ is compared, metaphorically, to an imaginary wall which divides different groups of people, until the moment of their ‘first contact’. As von Wedemeyer’s piece develops, the concept of the ‘fourth wall’ is investigated in a series of eight interrelated films, many of which are staged and shot in locations around the Barbican Centre. These individual films merge to create a meditation on authenticity, fabrication and belief.

The starting point of von Wedemeyer’s narrative is the Philippine group of the Tasaday who were allegedly first ‘discovered’ in the rain forests of Mindanao by Western explorers in 1971. The small group became an instant news story: an extraordinary people living a life untouched by contact with other civilisations, and unchanged since the Stone Age. By the 1980s they were to receive renewed international press attention when anthropologists and journalists declared that the Tasaday had, in fact, been perpetrating an elaborate hoax. Had these 27 people been acting on the world stage all along?

In von Wedemeyer’s fiction, protagonists of a play staged at the Barbican Theatre are inspired by the Tasaday. Further film fragments, set in a Barbican apartment, the Conservatory and highwalks, explore the theme of ‘first contact’: first contact between civilisations, between the actors and their audience after the play’s premiere, and between an explorer and an undiscovered group. The films shot by von Wedemeyer are interconnected with documentary footage and interviews which combine to create a narrative that addresses how societies regard one other, and how they approach the unknown. As the story unfolds through the gallery space, the distinctions between reality and fiction becomes ever more blurred and the ‘fourth wall’, that invisible line between belief and disbelief, is challenged.

Clemens von Wedemeyer was born in Göttingen, Germany in1974 and currently lives and works in Berlin, Germany. He has won several international awards for his short films, video works and installations, including the Böttcherstrasse Art Award (2005) and the VG Bildkunst Award for Experimental Film (2002). Von Wedemeyer has exhibited in numerous group and solo exhibitions in Europe and America. Group shows include Skulptur Projekte Münster, Germany 2007; the 4th Berlin Biennial, Germany 2006; the 1st Moscow Biennial, Russia 2005 and the Turin Triennial, Italy 2005.

TALKS & EVENTS
29 May/6.30/The Curve ,Cinema Walking
Join artist Clemens von Wedemeyer for an in-depth exploration of The Fourth Wall, including insights into the subject of the work and his process, filming in the Barbican conservatory and beyond.

Is there anything left to explore? What do TV and film contribute to our eternal search for a noble human civilisation? Is the contemporary traveller the creator of fictions, a documenter of the undiscovered or an unwelcome intrusion? Join Benedict Allen, explorer and presenter of 6 BBC television series including Last of the Medicine Men and Icedogs, the Rev Peter Owen Jones, former adman turned vicar and presenter of Around the World in 80 Faiths and Dr Chris Wright, Centre for Visual Anthropology, Goldsmiths, University of London, co-editor of Contemporary Art & Anthropology. Chaired by Graham Sheffield, Artistic Director, Barbican Centre.