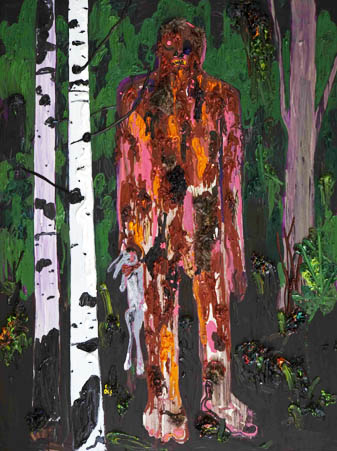 May 21 – June 25, 2009
For his second show at Freight + Volume, Toronto-based artist Kim Dorland will present a new series of paintings entitled “Super! Natural!”

In “Super! Natural!” Dorland finds occasion to expand upon his previous explorations at the convergence of suburbia’s plainness and nature’s ubiquity. As in “North”, Dorland’s New York debut at Freight + Volume, these paintings exhibit a considered investigation of posture and place, singularly executed by Dorland’s exaggerated palette and animated brushwork, which he brandishes with an elegant choreography of spraypaints, acrylics and oils. The viewer beholds the primordial as it meets our quotidian, revealing the powers and enigmas of human documentation that Dorland’s works strikingly corroborate. His always faceless portraiture keeps secrets; his quiet copses are never without humanity’s telltale traces: graffiti pollutes the treetrunks, litter the forest floors.

“Super! Natural!” finds Dorland reaching toward a more dedicated and very human mythification of the northern wilderness he calls home. In addition to the colloquial and familiar themes found in Kim’s previous work, a painting such as Sasquatch imparts a humorous yet percipient rendering of the anthropomorphic lynchpin of regional folklore. Hefty impasto and swatches of fur lend the composition an aggressive three-dimensionality as a freshly-killed hare hangs from the hand of the behemoth miscreation, conveying a morbid jocularity. RIP Tom Thomson, another key piece in the exhibition, plays as an homage to the famed Canadian painter along with the adjacent Group of Seven, allowing Dorland to find balance between his contemporary practice and the materials of tradition he shrewdly manages throughout all of “Super! Natural!”. In RIP Tom Thomson, butterflies populate these busy, much-graffitied woodlands while cryptic phrases such as “No end ever no end for you no end in sight” and “The Boy is Lost” mar the treetrunks in a masterful consideration of place, praxis, person and time.

The massive, clamorous Super! Natural! supplies a prime fusion of the concepts of tradition and regional mythification found in the neighboring work. As Dorland explains, “Super Natural is an old jingle advertising the natural beauty of British Columbia…I thought it would be a nice tongue-in-cheek reference to the mythic natural beauty of Canada’s wilderness and the history of painting the ‘untamed’ nature that surrounds us.” Dorland gives further insight to this essential work, indicating that “the painting is based on posters in national parks where they show all of the animals that can be found in the region.” As in Henri Rousseau, these are man’s animals, and the zoo is, for Kim and for Canada, paradoxically natural. In these fascinating new paintings from Kim Dorland, the viewer is prompted to inquire, where ends the fake, and where does the real begin?

Kim Dorland received his BFA from the Emily Carr Institute of Art and Design in Vancouver followed by his MFA at York University in Toronto. He has had solo exhibitions at Angell Gallery, Toronto; Bonelli Arte Contemporanea, Mantova, Italy; Bonelli Contemporary, Los Angeles, CA; Kasia Kay Art Projects, Chicago, IL; and Skew Gallery, Calgary, Alberta. He has been the recipient of numerous grants and awards, and has his work included in the Sander Collection in Berlin, Germany.