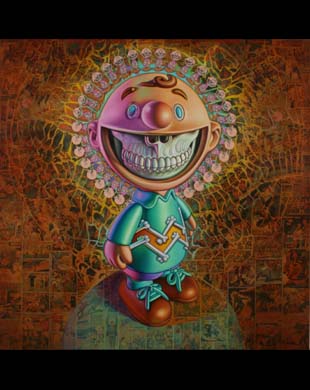 What makes a Ron English piece of art instantly recognisable beyond its signature photorealist technique and brazen colour scheme is the utterly unique way in which the artwork presents a new idea embedded in the familiar, creating progressive mutations whilst referring to historical events.

When English was an art student he started to hijack billboards as a way of displaying his art to as many people as possible – it was later that he realised he could make political statements by the same means. He replaced existing advertisements with his own hand-painted “subvertisements” spreading his own socio-political message.

The new exhibition, with its deliberately provocative theme of resurrection, reflects the contemporary socio-political situation, presenting uncomfortable and dark insights beneath the slick, plastic face of our society.

“Ron English continues to exploit the mismatch between effortless style and edgy content in his paintings. It’s an effective strategy, wrong-footing viewers and making them reconsider the way they might absorb imagery from advertising without critically engaging with it.” Ben Jones, art historian.

Included in this exhibition, are some of Ron English’s latest canvases from a series of paintings based on the 1937 Picasso masterpiece ‘GUERNICA’ Whilst the original depicted the tragedy of the Spanish Civil war, English has transcribed the composition to reflect our troubled times.

A beautiful limited edition book has been published by the gallery to accompany the exhibition.

It is a hard bound book of 48 pages, with 29 full color images, and costs £35. The introduction has been written by Paul Jones, and an essay by writer and critic Francesca Gavin gives an insight into Ron English’s pioneering approach to art.

Ron English will be in the gallery between 12.00 and 2.00pm on Saturday 9th May to sign copies of the book