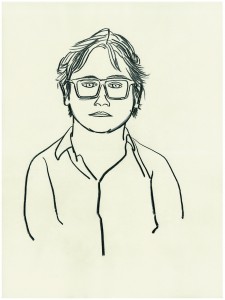 7-23 May 2009 Private View invite only.
Bloomberg SPACE announces the next commissions in COMMA, their fast paced programme of exhibitions. Every month, the gallery gives two artists a space each to make new work.

Dan Perjovschi is an artist who mixes drawing, cartoon and graffiti, working quickly and directly on the walls of museums and contemporary art spaces all over the world. His drawings comment on current political, social and cultural issues, as he trawls the media at the time of the exhibition to make simple direct responses. In doing so, Perjovschi will turn the front gallery at Bloomberg SPACE into a giant sketch book, immersing viewers in a sea of information. His activity will extend into the exhibition as he continues to draw after the opening. Dan Perjovschi was born in 1961 in Sibiu, Romania and now lives and works in Bucharest. Further information can be found at www.perjovschi.ro

Jadranka Kosorcic is working with members of staff at Bloomberg to make her exhibition. In the run up to the opening, she will draw employees to make a series of strong, expressionist portraits. Advertising for ‘subjects’ on the internal Bloomberg network, she expects some sort of connection with her subject on both a physical and mental level before she chooses who to draw – she likens this process to a kind of ‘Blind Date’. This is not simple street portraiture though – her fine, hard, singular line captures something particular about the sitter. Her pared-down portraits seek a clear connection and an unblocked, uncompromised view of another human being. Using the rear gallery of Bloomberg SPACE, Kosorcic will also project hugely enlarged portraits, to be seen from many levels from within the building. Jadranka Kosorcic was born in Split, Croatia in 1972 and now lives and works in Munich. Further information may be found at www.flachware.de/jadranka-kosorcic/