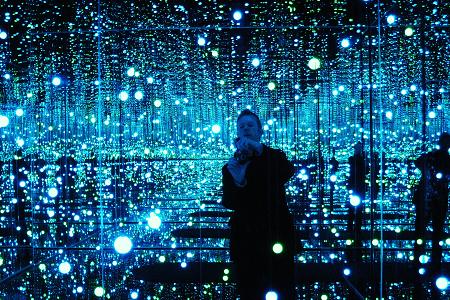 The collection on until April the 9th at Victoria Miro Gallery allery and Siobhan Davies studio have curatorialy collaborated on a joint space exhibition to place their disciplines into each others surroundings.
Both respective art forms cross the river to occupy each others spaces for an interesting exhibition that provides a mental link in those who make the journey to both the dance studios in south London, and the Miro gallery in the east, which is where I start.

The first piece turns into a familiar gallery setting for art, but less so for dance. So, for an art lover this set me at ease because I openly admit that I know little or nothing about contemporary dance. In the first gallery, three film screens dissect the space in a very appropriate way. This has a habit of leading the viewer around the screens as the films unfold. It was an experience I could reflect upon because, as I was about to leave the space I watched others enter and begin their confrontation with the work. Most
followed a similar path around the space. This seemed like a choreography all of its own and as one who had unwittingly taken part I could only enjoy the success of this aspect.

But this is not the most immediate grasp of the viewers attention. The films alternate on screens and show the same library setting and dancer, which asks the viewer to take the collaboration as an academic entity. This aside, the movements seemed to be a referral to books, narratives, and the complications and harmonies of knowledge. The repetition of the movements were as if the story’s were repeated through generations of knowledge, and then disseminated and rebuilt. As the eventual repetitions evolved from the dancer and film editor, one was well aware of hands, body and the edit being the conceptual narrative. turning, falling and returning. Your space in that narrative is- , just that, That space,that time.

Idris Khan effortlessly gives his notable style to the film whilst working in a solid collaboration with
Sarah Warsop, who is clearly a dancer of note even to a novice such as I. The sound of the space is amongst other aspects of the work which is important to both disciplines, and this works for both in conjunction, rather than separately, especially the sound of the viewers as the confines of the library are in the confines of the gallery. This seems to be one of the most identifiable questions that thepiece is making. The sound of the film seeks to ruffle the pages of the books as well as frame the movement of the dancer, subtle though it is, successful it remains.

Outside in the garden space the attention is directed to ‘Narcissus garden’ by Yayoi Kusama which slow ebbing movement floats metal chinking balls together in the galleries water feature. There is really no need to talk about some art works as they do not rely on words to uphold their meaning. Suffice to say it is a beautiful experience and in the context of the show, clearly defines what movement is for the majority of those on this planet, led of course by the nature that controls andsurrounds us. It pulls the movement of the artwork into the context of the show despite the claims that these were especially commissioned artworks for the show, (the piece was made in 1966), It clearly works so well and as one of the highlights for me, so I wont even mention that. Especially as’ The gleaming lights of the souls’ by the same artist (2008) clearly demands attention and is going to be one of the most talked about experiences of the exhibition, and rightly so.
On arrival upstairs to the dance performance we sat for some time in amongst the participants in the
piece who seemed to outnumber the audience. ‘Minutes’ 2009 interjected moments of spoken sound
and movements that denoted time, sliced by the performers as they started and suddenly stopped.
This is an interesting piece of dance but as I become more aware of the exploration of boundaries and ties
within the collection, I am getting further away from the question of weather I like it or not. It has become
an irrelevant question. At least I feel like I am getting something from it, even if it is just a glimpse into
the world of contemporary dance.

The art at Siobhan Davis studios did not look out of place in this dance studio, one of the nicest I
have seen. A series of works with meditative reflections, on and in space seemed to be the connection to
Miro in the east. But Conrad Shawcross is concerned with more than that, and as such should give those
who use the studio more to think about. He uses quests for knowledge, both failed and successful for his
inspiration. And as such, explores the boundaries of these questions, and the reflective positions that they
supposedly occupy, The pieces of note are the ‘Picture of a chord falling into silence 2008 and the main
exhibit in the upstairs dance studio ‘Slow arc inside a cube’ 2008, until April 9th.
Victoria Miro , 16 Wharf rd, Old st. and Siobhan Davis 85 St. George st. Elephant and castle.