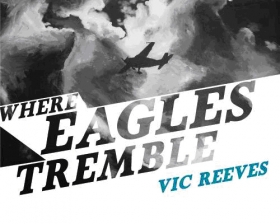 Vic Reeves, one of the UK’s most recognisable names from the world of TV comedy is to show a
selection of new paintings this April in the heart of Mayfair in association with Eyestorm, the leading
online gallery and publisher of limited edition contemporary art. Titled ‘Where Eagles Tremble’, the
exhibition features a new series of paintings that illustrate a fictional story written by Reeves about
enigmatic film actor Alan Todd, who makes aviation films featuring WWII airplanes. Surreal and
humorous like his comedy, Reeves’ new works are beautifully crafted and sublimely absurd, and
once again prove that he is not just a comedy genius but a serious visual artist who will take you to
another dimension with his perplexing imagination.
Mews of Mayfair 10-11 Lancashire Court New Bond Street Mayfair London W1S 1EY
www.whereeaglestremble.com