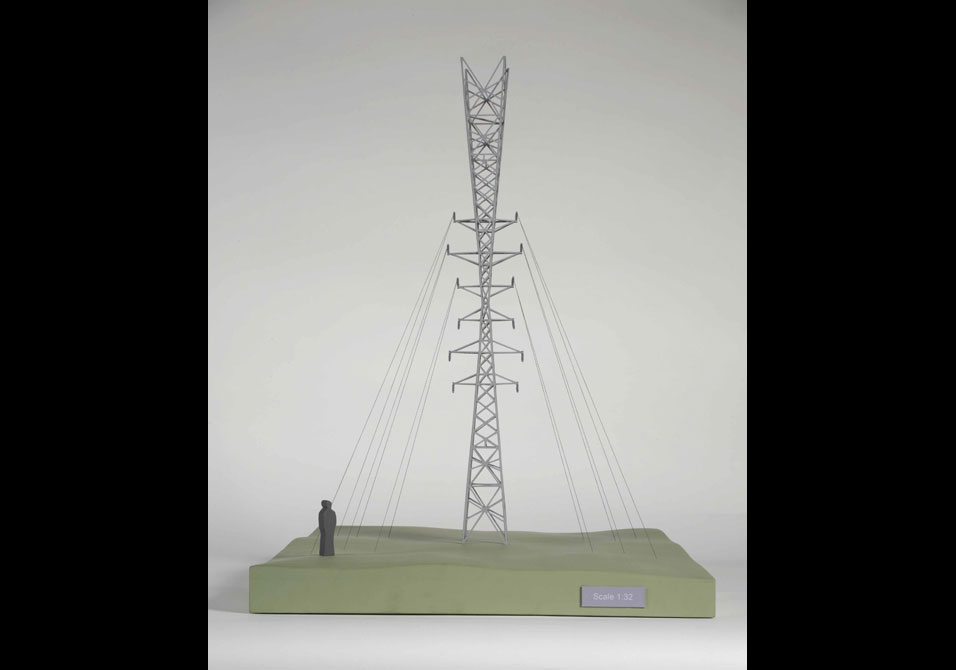 Michael Visocchi’s proposal for Yield has been awarded the 2009 Jerwood Sculpture Prize’s winning commission of £25,000. Yield will be produced as a largescale, permanent sculpture to be unveiled at the Jerwood Sculpture Park, in the grounds of Ragley Hall, Warwickshire in spring 2010.

For his proposal, Visocchi has taken scaled down models of electricity pylons found near Ragley and placed one on top of the other. Constructed in galvanized mild steel, the sculpture will stand as a contemporary monument to modern day technology and, at 18m in height, will be an impressive presence in the landscape. In choosing to take the form of the pylon as his Jerwood sculpture, Visocchi makes us think again, not only about the design of these structures, which so often we do not even notice in the landscape, but about the 21stcentury issues of climate change, carbon footprints and renewable energy.

Visocchi: ‘The search to produce and transmit more and more energy is now acknowledged to be directly proportional to negative impacts on global climate. The paradox is, however, that pylons are a necessity for a successful and vital link in servicing communities around the country as we continue to consume more energy to satisfy increasingly complex lifestyles.’

This prestigious prize is presented by the Jerwood Charitable Foundation, as part of their dedication to supporting and nurturing talented artists. Now in its fifth year, the prize has built a strong reputation for quality and innovation. This year, from the 120 applications initially received, 8 artists were short listed and each commissioned to research and write a detailed schedule to create a representative maquette of their planned sculpture. As well as receiving £1000 to help with the cost, each artist is also offered advice, guidance and support whilst developing their proposal. The exceptional 2009 shortlist was truly representative of the diversity of thinking in contemporary sculpture, with each of the sculptors approaching the task in a very different way, employing a wide range of materials and techniques.

Maquettes of the eight short listed proposals will be on exhibition in the Jerwood Space, Union Street, London SE1, until 9 April 2009, open 10am – 5pm weekdays and 10am – 3pm weekends.