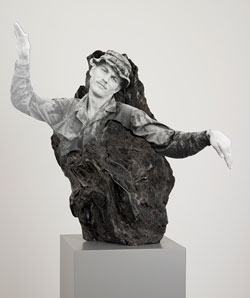 Modern Ruins brings together the practices of four artists who through very different methods create an archaeology of the present.

Croatian artist David Maljkovic’s disarming photographic montage continues his exploration into the ongoing legacy of modernist architecture in the former Yugoslavian state. His work, like that of Goshka Macuga, excavates recent history while transforming its ongoing meanings and interpretation. Here, Macuga presents a sculpture that pits the documentary impression of the photo alongside that of fossilized wood. Drawing inspiration in part from the American photographs of 19th century classicist and art historian Aby Warburg, his work also helps inform a new poster by Abraham Cruzvillegas, created during his recent residency in Washington D.C. While Cruzvillegas captures minute and intimate expressive gestures, the work of Dr. Lakra takes this to a further extreme. Best known for his satirical tattooing of found cups, dolls, vintage magazines, here he is showing new collages inspired by the paintings of Arcimboldo.

GOSHKA MACUGA (born 1967 in Poland, lives and works in London) in 2008 Macuga was nominated for the Turner Prize, following her participation in When Things Cast No Shadow, 5th Berlin Biennial for Contemporary Art, 2008 and Objects in Relation – Goshka Macuga, Tate Britain, 2007. Current and upcoming solo shows include: I Am Become Death, Kunsthalle Basel, and The Bloomberg Commission – Goshka Macuga, Whitechapel Gallery, London, April 2009 – April 2010.