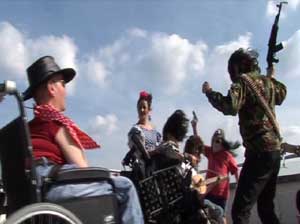 DATES: 25 March – 14 June Private View Tuesday 24 March 6-9pm to celebrate
The Way Out 15mm Films to be launched by David Morris, Policy Advisor to the Mayor of London
Beaconsfield Commissions 2009
Some of my best friends are able-bodied; I can’t ask them to just donate a limb… Peedy, The Way Out, 2009 Disability has never had its revolutionary moment: no Suffrage, Stonewall or Watts Riots.

‘The Way Out’ stages a reversal of this historical omission, imagining a world in which a violent, insurrectionary gang of ‘disability terrorists’ has brought the world to its knees à la Baader Meinhof/ Angry Brigade. Under siege from the cops, the gang implodes, killing time, doing drugs, making art and writing bad pop songs as the walls of their bunker loom in…

The movie is a hole at the centre of this parody – the missing Movie about an absent revolution.

15mm Films challenge normative perceptions of disabled people. A collective of artists working in the fields of visual, performance and video art, they are committed to innovation and take an experimental approach to collaboration. Current members of the collective are Aaron Williamson, Katherine Araniello, Laurence Harvey, Simon Raven, Juliet Robson and Philip Ryder.

The Way Out is a Beaconsfield commission supported by the National Lottery through Arts Council England,
Esmee Fairbairn Foundation and Arts & Humanities Research Council.