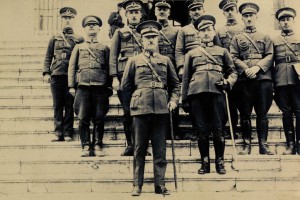 Kutlug Ataman, Frame, 2009, Courtesy of Francesca Minini, Milan and the artist Produced by The Institute for the Readjustment of Clocks, Istanbul.The Lentos Art Museum presents today Kutlug Atamam: Mesopotamian Dramaturgies, on view through April 19, 2009. Mesopotamian Dramaturgies brings together a new series of work by the internationally successful Turkish artist Kutlug Ataman. In his work he explores the breaks between “the own” and “the other” – with traditions and conventions, beliefs and convictions that can trigger conflicts within a society or in a clash of different cultures.

The exhibition focuses on the upheavals in Turkey in recent decades, political, cultural and economic changes, struggles between religious and secular world views, and the tension between east and west which Ataman defines as an acute crisis. The exhibition also deals with the history of western modernism and the question of the justification of its claim to universality in conjunction with an investigation of frequently cited European “values”.

At the beginning of the five rooms of the exhibition there is Dome, a video installation with portraits of Turkish male adolescents in western everyday clothing. The suspended flat screens form a roof over the heads of the viewers, resulting in the impression that the adolescents are floating in the sky – but this is only with the help of the technical construction.

The two-channel projection Journey to the Moon is a docu-fiction telling the story of a village in eastern Turkey, whose inhabitants want to travel to the moon. This narration is commented on by well known Turkish intellectuals, scientists and journalists.

In another work, The Complete Works of William Shakespeare, collected dramas by the icon of western literature were transferred handwritten to 35 mm film. The significance of writing as an art form independent of the content – calligraphy – in oriental culture is adapted to portray the cultural heritage of European literature.

In this exhibition Kutlug Ataman will bring together a total of eight new works – video installations and projections, and a photographic object. “It is absolutely necessary to show all these works together, because the interplay of the single works forms the backbone and the soul of the exhibition.” (Kutlug Ataman)