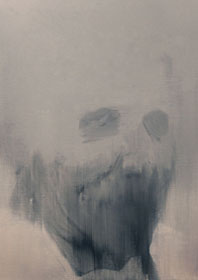 Trolley Gallery is proud to present a solo show of new work by Boo Saville, exploring the symbolic and ritualistic images of human remains and archeological remnants.
In recent years, Saville has explored the surreal origins and mysterious forms of archaeological human remains. The title she has chosen for this show, ‘Butter Sunk’, is derived from the poem ‘Bogland’ by Nobel prize winning Irish poet Seamus Heaney and is the title of a new work produced for the show. In 1969, after reading P. V. Glob’s ‘The Bog People’, an account of the discovery of well-preserved, centuries-old bodies in Danish bogs, Heaney had written a series of poems. Similarly inspired nearly forty years later, Saville had used some of the images that appeared in Glob’s book as source material from which to work, her detailed biro recreations resulting from the often small, black and white, grainy photographs.
Saville’s preferred sources are often these photographs from scientific or archaeological textbooks like Glob’s. Purely documentary and non-subjective in their approach, these images catalogue an archive of curled and gnarled human phenomena, also often the victims of bizarre and intriguing sacrificial murders. “There is a beauty and brutality in these photographs” Saville suggests, her drawings explore the totemic and sacrificial nature of representation. Her response is an imitation of nature, yet translated through her own analysis of the subject and its form. As she explains, “I am interested in the ritualistic and symbolic power of an image and in the lies we tell in order to make them.”

Her focus is also the texture and surface of drawing, harnessed through her intuitive use of simple biros and pens: fine details of bones and hair are coupled with layer upon layer of shaded lines to produce tones and depths that resonate the shadows and amplify the echoes of these post-human forms. There is a new and impressive biro drawing ‘Butter Sunk’, from which the show is named. A triptych of a curled and coiled cadaver found in Denmark, and other new large-scale work, this time where she has used white ink. The tones and depths are similarly striking to biro, but this exploration of working in white has created new opaque contrasts: a skull’s eye enclave looms outwards and inwards, defying the spatial limitations that pen on paper can usually offer, a solarised complement to the biro work. She ekes out of these simple materials resounding details, and disorientating linear constructions, culminating in a true mastery of penmanship.

The variety of new media produced also demonstrates explorations of colour, texture and form, most evidently in the collage works, which fuse detailed biro with surreal primary colour constellations, and her paintings, which replace the monochrome lines of biro and pen with fluid and amorphous puddles of colour. “The new paintings are suggestions of an idea rather that the illustration which is achieved in drawing. The paint has a much more lucid quality which I want to exploit.” For Saville this lends to a more poetic gesture. In the miniature enamel panel of a broken grave, produced whilst on residency to the Cite Des Arts in Paris last summer, she encounters not only the purely archaeological and deceased, but the modern relic, the metaphysical fascination in all of us for what happens to bodies after death, whether in a Paris graveyard for public pilgrimage, or reclaimed to the earth’s epidermis and seemingly lost forever. As she states: “I am fascinated by our obsession with the evidence of human existence and evolution.”