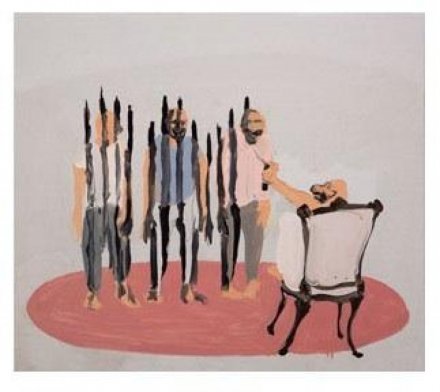 Pilar Corrias is delighted to present the London debut of Iranian-American painter Tala Madani. One of the most engaging painters of her generation, Tala Madani creates darkly comic mis-en-scènes in which small and large scale groupings of bald men engage in absurd scenarios that manifest playfulness alongside violence and perversity.

For her first exhibition at Pilar Corrias Ltd, Madani has created new works inspired by dazzle-ships. Devised during the First World War to confuse and upset the targeting of U-boat commanders, dazzle-ship painting was a method of camouflaging ships in brightly coloured distortions of sloping lines, curves and stripes. Inspired in part by contemporaneous artistic developments within the Parisian avant-garde, dazzle-ship painting shared the cubist concern with breaking down the realistic appearance of objects. Madani has taken tropes from this archaic and short-lived camouflage method and articulated them parodically.

Dazzle-ships become dazzle men enthusiastically trying to disguise themselves in sloppy, painted camouflage, or offering up absurd demonstrations of their valuable ‘techniques’ to theatrical groupings of keen pupils. Whilst the more descriptive and intimately scaled works depict the dazzle men in action, Madani’s new large-scale paintings articulate tropes of American abstraction bathetically through repeated human forms. Ideas of camouflage and concealment are expanded in works such as ‘Everyone Wants To Be Chinese’ (2008) in which the subjects play ‘face-off’, changing their identity by hiding behind a picture or disfiguring a face.