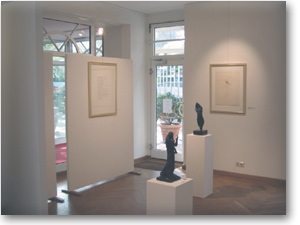 Thieves stole works by Pablo Picasso, Henri Matisse and others from a Berlin gallery over the New Year’s holiday, police said Friday.
More than 30 works — worth an estimated ?180,000 ($250,000) — were stolen, apparently between Wednesday afternoon and lunchtime Thursday, police spokeswoman Claudia Schweiger said. The artwork was taking from the Fasanengalerie, a private gallery near western Berlin’s central shopping district.

The etchings, prints and sculptures included “Profil au fond noir,” a 1947 work by Picasso; “Nude in a rocking chair,” a Matisse print from 1913; and “Le Boupeut,” a 1962 color print by Georges Braque.

The gallery’s owner discovered the loss New Year’s Day, having found signs the door had been pried open, police said. Given the number of works stolen and the weight of the sculptures, two or more people probably were involved, police said in a statement.