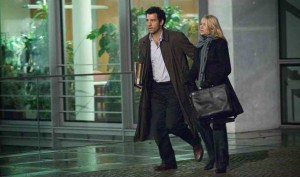 Get ready to see the Guggenheim in a whole new way. In January 2008, a cast and crew of over 150 people assembled at the Guggenheim Museum in New York for the filming of an action thriller entitled The International. Now opening in the U.S. on February 13, 2009, the movie was directed by Tom Tykwer (Run Lola Run and Perfume) and stars Clive Owen as Interpol Agent Louis Salinger and Naomi Watts as Manhattan Assistant District Attorney Eleanor Whitman. Both are determined to bring one of the world’s most powerful banks to justice, taking them on a global chase from Berlin to Milan to New York to Instanbul. Visit the movie’s official site.