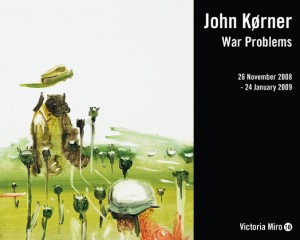 Recently on view as part of the 2008 U-Turn Copenhagen Quadriennial, the paintings on exhibition are a significant departure for the artist, who was drawn to the subject matter after reading local news reports: ‘I had lots of questions about what Denmark was doing in the War on Terror in Afghanistan and why a country like ours was involved when we never used to take part in wars.

Unlike a traditional war artist, Kørner himself has not visited Afghanistan nor witnessed first hand how the sixteen soldiers lived and died. From the outset, his intention was to create an image of a dead Danish soldier that was independent of insider knowledge or a result of investigative research: ‘I want to be equal with everyone else, not a step ahead by discovering something they didn’t know.’ The sixteen paintings do not exist as portraits of the individual soldiers or as documentation of the actual events of their deaths, but rather function as a collective expression of the human tragedy imparted by this war.

Kørner’s signature use of watered-down acrylics, bleeding brushwork and intense colours is seemingly at odds with emotive and often disturbing scenes of war. In Thorbjørn three local women stand around a body, red paint erupting from the soldier’s chest. In another work, Henrik, black paint is applied in staccato strokes across the canvas like a spray of shrapnel, below which lies the body of yet another soldier, clearly identified by the Danish flag on his uniform.

John Kørner has long referred to his paintings as ‘problems’: playful explorations of the medium’s duality – its physical presence and its descriptive power. Here, these ‘problems’ of war offer up a visual encounter as well as open up space for the continuation of debates around current international conflicts.