150 contemporary art galleries, 1000+ artists, 27 countries and 200,000 sq ft of space to show your tricks to an increasingly turbulent market. Whether you are looking at, selling or collecting art, or simply showing off your new dress, there is something that attracts a vastly differing crowd to frieze every year. There are those that are there to see, or those to be seen. Frieze can, and does do something for everyone as it casually borrows from each to lend to a whole. Frieze does that as well as the best fairs worldwide.

The production of the fair was good (we’ll get to gallery production later). Its well thought out, and evolved to do the job whilst sticking to the main trade exhibition format. Sell space, sell sponsors, sell tickets, give a good value at a high enough price and you’ll keep various clientele just on the near side of exclusive. That said even ticket concessions can afford a tenner. It was however nice to see that the café’s, bars etc. were priced at normal London prices.

The cost of stands ( ranging from 5 to 30k) is not a bad price to recoup for even the most daring of exhibits and, as one owner declared to me (gallery name withheld at their request) its not too much to bear as a loss leader. Post sales and contacts in this arena are of more potential for some outfits.

This is why frieze is no longer publishing details of sales due to this and some galleries reluctance to share accurate details. Thus previous figures have been found to be slightly misleading and estimates have been on the small side in the past.

Getting through security was a typical event for the times we live in and worthy of note was seeing that even Charles Saatchi had to queue . This leaves you in the middle of the event with no clear place to start but the info point, thus settling most into a pace of swanning rather than systematically doing every stand.
This is great for the secondary function of frieze as a place to be seen and a good day out. In amongst the crowd were quite a heap of notables from minor royals and your usual actors and socialites treating it as if they were also artworks.

Most of them couldn’t help looking like they were doing what they thought they should do without committing to any serious points or opinions (couldn’t help over hearing one of them asking what to wear at Nicky Haslams party that night) .

Hence most of them seemed to perfect the expression of a down turned mouth, raised eyebrow and a slow agreeable nod as the way to finish viewing a larger work of art (size is a good indicator to some if you know sod all about art).

This leaves the collection of art lovers who fall into two categories of being able to buy, as opposed to, love to look. They are both thankfully in greater numbers than the aforementioned, and give the business end of frieze its clout for galleries and organizers alike, 67,000 attendees in 2007 ( fig. not released yet for 2008). That is quite some traffic and the ticket sales could scarcely be better.

Now to gallery production, utilising the space was on the whole pretty good with galleries having to put on a show that took the owners/curators ethos to their desired market, to achieve the greatest effect. Although in that respect, some were more successful than others, the big elephant in the room was that some works were held up by nails!!

This happened with alarming regularity. Have they no idea of the alternatives available? Clips, runners, archival attachments? Surely having spent an average of 10/15k on a stand one might have put a little extra thought into the hanging. Give the work the reverence you’re telling the buyers it has.

Now to the business that is on everyone’s lips. The state of the art market itself. With the last five years seeing the first major upward cycle of the Chinese and Indian contemporary art market it was bound to cool as speculators look else ware.

This is born out by Sotheby’s contemporary Asian art evening in Hong Kong with 40% being left unsold and contemporary Indian art auction in New York coming in over 10% lower than the bottom end of the estimate. Christie’s faired no better with only 65% selling of their contemporary Indian lots. (stats. Arttactic).

Investors need only look at the sharp curve in recent prices, and the current economic shaped pin that was obviously going to burst that bubble. This is by no means a bad thing and will provide the first battering ram of natural selection for the art market as those who are savvy can truly capitalize on the upcoming situation.

The ‘situation’ is more than one of investment, and needs to take into account many factors that have emerged that can create real and palpable opportunities. It’s at this point, when the original primal investment opportunities have stalled and receded by 10-20% (bricks, stocks and shares etc.) and metals at an all time high, art dealers can capitalise on selling art investments to a whole new breed of investors.

Many of whom might not have been to a gallery for the last ten years . Not just traditional investors but those who might be persuaded to sit on an established artist until the time is right to cash in. This will largely incorporate first time buyers purchasing small prints or paintings. Thus propping up a certain kind of gallery/dealer through the downturn as sales to the new breed of recent mildly affluent buyers dries up and new investors are persuaded of the benefits of investing in art. This era could be the defining point where the market reaches mainstream and it becomes as acceptable for the middle classes to invest in art as it is to put your cash in ISA’s. Although a bit more risky, the market is high volume and small turnover but potentially huge never the less.

Art is also the biggest industry not to be regulated by government and remains a better bet for some individuals who might need to put their money out of harms way, or that of customs or the taxman. Art theft as a whole is the worlds 4th largest criminal activity, behind arms, drugs and money laundering and has a whopping great insurance industry to tackle it.

Bargain hunters should be swirling as many collectors reorganize themselves and offload pieces to shore up their portfolio’s, it’s a time of quick sales being needed for some, and a pick of bargains for others.

Here lies the final point I am making about frieze. This was the jist of many conversations I had with gallery owners at frieze. I’m pretty good at body language and at least half of the people I questioned were blank about opportunities, and this was written over their face.

The other half, who I could see, new very well, didn’t want to talk about their strategy but admitted it was an interesting time and were cautiously optimistic about creating new opportunities. Although the two who entered into the spirit of the conversation with me came up with the same Ideas. Makes you wonder who will still be here in the next few years. Those that survive will be all the stronger.

In the latest of his interventions Massimo Agostinelli Deposits Blocks of Ice at Frieze London. 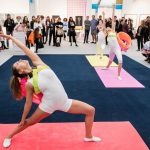 Tabish Khan loves art and visits hundreds of exhibitions a year. But every now and then he comes across something […] 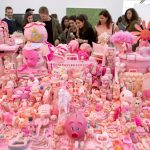 Frieze Art Fair is looking to launch in L.A. Next Year

According to a report in an art industry newsletter Frieze art fair is planning to launch in Los Angeles in January 2019.