The depiction of Shahnoza has been a recurring theme in Opie’s work, and the Alan Cristea Gallery has commissioned a short film to explore the history and development of the new works. This film joins the dots from source material to exhibition installation, inviting the viewer into the fiercely private studio of this enigmatic contemporary British artist. It combines never seen before archive footage of his models with computer generated drawings, animations and studies of his most recent works; documentary footage of the installation process, footage of the exhibition itself, accompanied by a commentary by the artist.
see the film on fad now to your right.

The launch of the film coincides with the publication of a major new monograph entitled JULIAN OPIE. Published in Japan, this new book covers every area of the artist’s work and will be over 800 pages long including installation photographs, source material, studies as well as an exhaustive illustrated back catalogue of his work to date. It will be the most comprehensive publication on his work and is exclusively distributed in Europe by the Alan Cristea Gallery.

The book will also be available through Opie’s new on-line shop that is being launched at the same time. Julianopieshop.com is a groundbreaking website which has been created solely to distribute the artist’s merchandise. Opie has always wanted to break down the illogical barriers set up by the “Art World” between painting and design, sculpture and objects, and over the years has made a large number of items which feature his signature images. This dedicated site, the first of its kind, will sell online his catalogues, wall stickers, posters, note blocks, fridge magnets, LED animations and lenticular cards. 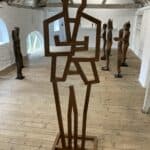