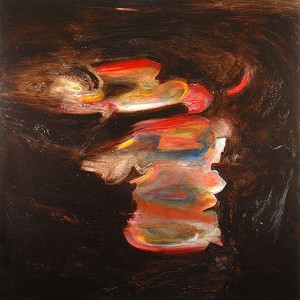 As soon as I could pick up a biro, drawing on the back of old rolls of wallpaper or on the obituary sections of the Walsall Observer. Sounds a bit morbid but I probably hadn’t really taken on the concept of mortality at the time and the tiny newsprint with its even tone was nice to work on.

I came to art via a pretty circuitous route. Comics were my first interest and I used to write and illustrate a comic strip for a UK climbing magazine called On The Edge at one time. Reading Art Spiegleman’s ‘Maus’ got me interested in modern art, mainly Picasso to begin with, and then I attended life-drawing classes where I met Bob Clark (art critic for the Guardian Guide). He encouraged me to take a fine art degree and that got me to Sheffield Hallam. Whilst there I got involved in graphic design and formed a company called Vertebrate Graphics with two friends – we were one of the many to ride the wave of success that came with the first flowering of desktop publishing. I still carried on painting whilst at VG, thanks to the encouragement of Karen Sherwood at Cupola Gallery. After about 10 years I found myself occupying a less and less creative role in the company so I sold my share to pursue a full time career as an artist. Some of the business skills that I picked up in graphic design have proven quite useful!

Masochism! Also the realisation that I had certain qualities (or talents, call them what you will) that might get wasted otherwise – also, the compulsion was such that I really couldn’t help it.

Well, that’s pretty complex. I guess at root it comes from nature. I saw some cave paintings recently in the South of France, awesome things, around 25.000 years old. A lot of people think that the animals that these people drew or painted were prey species, things to hunt, but we now know that they were attracted to the bigger, more fearsome ones as subject matter– mammoth, auroch, rhino and so on. They might be called ‘charismatic mega-mammals’ if they were living in a safari park today. So, what to make of that? I think what truly inspires me (as it has inspired the human mind since the great ‘neurological change’ that occurred about 10,000 years before the cave paintings appeared) is something that generates a sense of vitality, energy, awe or excitement. This might be a landscape, a big ocean wave or a very large mammal. It’s the feeling that counts and then, for me, the problem of conveying that feeling through drawing or paint.

I’m not sure if that’s really an explanation but it might go some way towards conveying my current way of thinking.

Via drawings – and a lot of thinking time spent on public transport.

From the sketchbook to the canvas I guess. Why? I find working on a large scale pretty interesting. I guess that there’s a physicality to it that I enjoy. Also it’s easier to manage a complex set of relationships on a large scale and it’s also possible to make a more meaningful use of space – negative space in particular. These are things that don’t really work in a sketchbook

I have some ideas for large sculptural works. I’m not letting on about these though – they’re far too good to let out into the world right now.

I like the question! Although, to be honest, I’m pretty happy doing my own thing.

There are a variety of reasons. Simply put, the drawings are a way of questioning our relationship to biology. The paintings are more of an effort to make sense of an evolving set of more or less abstract relationships between rhythmical brush strokes, colours and drawn marks.

10 What does being an artist mean to you?

A certain responsibility – not very fashionable these days I know!

11 Are you happy with your reasons for making art? I.e. are there any trade offs that make life hard?

I’m happy with my reasons. Sometimes time can be an issue – and the painful process of deciding when a painting or drawing is finished – sometimes I really can’t bear to finish them. The other problem, perhaps not for me but for other people, is the fact that I keep changing my style – commercial suicide really – and often very puzzling for my gallerists.

Depends on your cultural standpoint I think – something made in the hope of appeasing the gods?

I have an idea. Then I pick up a pencil.

15 Who prices your work? And how is the price decided upon?

I do. It’s pretty much what I think the work will sell for in a given location.

The most significant project in the pipeline is ‘Leviathan’ a life sized (20m) long drawing of a Sperm Whale (a modern day ‘charismatic mega-mammal if ever there was one) that will be hung in the x-church, a huge deconsecrated church in Gainsborough. It’s part one, if you like, of a bigger project called Origin09, a series of drawing projects, that will be organised around the same structure as the web site www.origin09.org. Origin09 is all about our complex relationship with biology and other members of the animal kingdom.

Pros: Selling work earns money for me and my family and I very rarely sell work that I think will suit ‘a market’ anyway.

Cons: Although it’s obvious that big money is calling the shots (to a large extent) when you get to the top of the tree, it would seem churlish to bite the hand that feeds me …

I would like to be remembered for all of the works that will be encompassed by Origin09 and all the good paintings (none of the bad ones!).

My mom and dad – it’s all in the genes you know!

Why, would you like one? I’ve given away quite a few, mainly to friends who have supported me along the way. 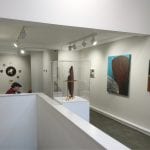