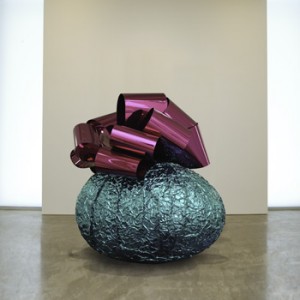 Gagosian Gallery is pleased to announce its second major exhibition in Moscow, “for what you are about to receive.” This exhibition follows the first presentation of Gagosian artists in the capital last year and continues to build upon Gagosian’s presence in Russia, with its previous support of the Cy Twombly and Willem de Kooning exhibitions at The State Hermitage Museum in St. Petersburg in 2003 and 2006.

The upcoming exhibition contrasts ways in which contemporary artists continue to investigate the twin pillars of twentieth century art: the readymade and pure abstraction, reflecting on the sublime through a self-conscious engagement with material and process.

To underscore these concerns, the site for the exhibition is a nineteenth-century former chocolate factory called “Red October,” a powerfully suggestive and highly atmospheric architectural landmark named in the spirit of the Bolshevik Revolution. Red October has been inaccessible to the public for many years; the Gagosian exhibition will open its doors once again, and inaugurate an ambitious new arts program for the city of Moscow. For many of these featured international artists, this will be their first exposure in Moscow.

Guests at the opening will witness the performance of Arc Light by New York-based artist Aaron Young, who has choreographed a team of motorcycle riders to weave dangerously on a specially prepared platform. The resulting tire-burns and skid marks create an amplified expansion of Jackson Pollock’s famous “action paintings.”

The title and invitations for the exhibition have been conceived as an artwork by renowned Scottish artist Douglas Gordon, a Turner Prize winner known for his work in a variety of media, including film and video as well as text.

Gagosian is a leading international contemporary art gallery with exhibition spaces in New York, Los Angeles, London and Rome. This exhibition is presented in collaboration with Prime Concept, Guta Group, Red October and National Centre for Contemporary Arts. Gagosian Gallery would like to thank our contributors for helping to bring this exhibition to Moscow.