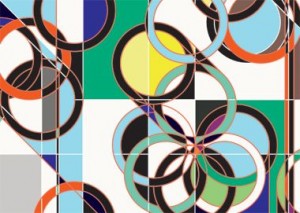 White Cube Mason’s Yard is pleased to present a new body of work by Sarah Morris. Since the mid-1990s, Morris has been internationally recognised for her complex abstract paintings and films, which are derived from close observation of the architecture and psychology of urban environments. In the paintings she uses colours and geometries that she associates with a city’s unique aesthetic vocabulary and palette, as well as its character and history. Morris’ films operate in the realm of documentary, biography of a city and non-narrative fiction and focus on the importance of architecture, the role of the state, critique of power, and the aesthetic tension between the commercial and the political.

The new paintings in this exhibition focus on the city of Beijing, the site for the 2008 summer Olympic Games. There are two sets of paintings being developed in parallel to each other in relation to Beijing: ‘Rings’ and ‘Origami’. The ‘Rings’ series takes as its main reference point the city’s increasingly congested traffic arteries known as the ‘Ring Roads’. The ‘1st Ring Road’ being named at the end of the Cultural Revolution. The original names of the roads had been changed to express the strong political propaganda required to eulogize and advocate the dominant ideology. When the political turmoil ended, the names had to be changed again. The ring roads may be seen as analogous to the Olympic rings and the upcoming event that is changing the face of the city. The titles of the paintings designate the past and future years of the Olympics, their corresponding cities, and the serial occurrence of this international event. In the basement gallery Morris is showing a group of new works including a modular, eight-part ring painting entitled ‘2028 [Rings]’ as well as three new paintings from the recent ‘Origami’ series. The series is based on found origami diagrams. Contemporary applications of origami range from the continuation of ancient traditions, such as folding 1000 paper cranes to realize a wish, to more scientific uses such as mathematical and engineering solutions for the development of a ‘soft’ surgical technique in heart valve transplants. It is a simple process which gives rise to complex forms. The paintings depict an unfolded pattern of creases. Combining mathematical calculations and geometrical operations, a single canvas turns into a highly complex spatial sculpture and back into a plain diagram. Morris is primarily interested in how origami in popular culture, particularly film, is often used to signify an impending event.

In Mason’s Yard Morris will also present her seventh film, ‘1972’. This is the second time following ‘Robert Towne’ (2005), that Morris decided to shift her lens from the wide panoramic view of a city toward an intimate portrait of an individual citizen within that city. Georg Sieber was hired by the International Olympic Committee as the head psychologist of the Olympic Police and also served as the psychologist to the Munich Police in 1972. His assignment was to project any possible scenarios that would jeopardize the safety of the Olympic Games and prepare the security forces with the required training. Sieber was present on Connolly Street that tragic morning of September 5th 1972, when members of the Black September terror group attacked, taking some of the visiting Israeli Olympic Team hostage. One of the scenarios written by Sieber in advance to this event, Scenario #26, was nearly an exact prognosis of what was to fatefully play out in reality. Contrary to the common perception that the Germans were not prepared, Sieber exposes a very different assessment of what took place.

In ‘1972’, Morris mixes Sieber’s version of history with police surveillance footage of demonstrators, archival photographs of the 1972 summer Olympic Games and panoramic shots of the Munich Olympic Stadium. The film centres on a candid interview with Sieber who has a long-standing career as a criminal psychologist and is now regarded as an expert on international security matters. The film, shot on 35mm, investigates the issue of projection, planning and its potential failures. It exposes a subjective parallel view radically different than the widely received ideas around the events of the 1972 Munich Olympics.

Morris’ next film project will focus on Beijing and will be shot during the 2008 Olympic Games.

A fully illustrated catalogue, with essays by Johanna Burton, Diedrich Diederichsen and an interview by Pierre Alexandre de Looz, will accompany the exhibition.