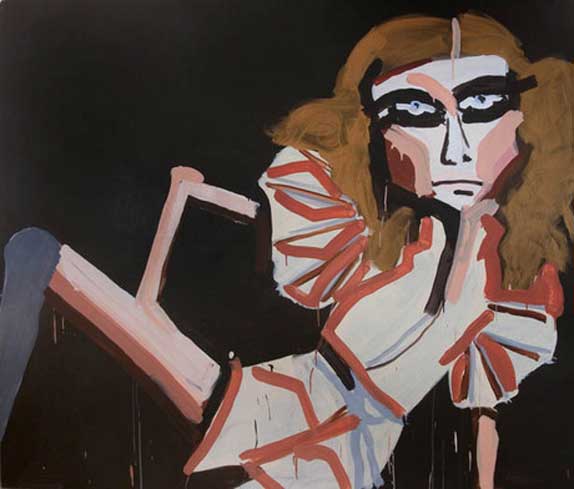 Patricia Low Contemporary is delighted to present Flesh for Fantasy, Katherine Bernhardt’s first solo show in Switzerland. Katherine Bernhardt’s paintings embody cosmopolitan edginess. Her lush canvases – which themselves pose as the currency of beguiling luxury – incorporate all the fantasy trappings of seduction, decadence and corruption, each charged with sordid soap operatic climax and the command of true-to-type bitches and divas. Looming larger than life, Bernhardt’s demoiselles flaunt exaggerated tales of womanly wiles: a tribe of Amazonian it-girls, goddesses, and super-heroines languishing in the ennui of money, power, and style.

Approaching painting as a platform for fiction, Bernhardt’s imagined characters are richly contrived portraits encapsulating both the vacuity of media image and the unpredictable response of consumer over-identification. Rendered with the fury of both adulation and envy, Bernhardt’s models emerge as freakish inventions – all Max Factor raccoon eyes, emaciated limbs, and swollen red pouts; troubled beauties relishing both idolisation and abuse.

Far from illustrating wry caricature, Bernhardt’s wildly expressive style illuminates her own complicit role as spell-bound fan. Her paintings are executed with rarefied passion, conveying urgency, obsession, and a desire to emulate through the act of making. Her engagement with beauty is funny, clumsy, and endearingly humiliating. ‘Getting it right’ fashion dissolves into planes of illusive abstraction as designer bikinis transform into ill-fitting triangles, eye-shadow hovers as lurid circles, and pink terrains of skin drip with melting suggestion of fake tan or plastic surgery rumour. Through her casual formalism, Bernhardt uncovers the true secrets of attraction: a beauty that lies in the pureness of sentiment and basic instinct aesthetic, packaged with the uptown savvy of raw ambition 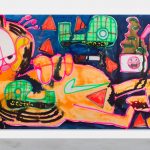 This will be the second exhibition by Katherine Bernhardt at Xavier Hufkens. Visiting Bernhardt’s exhibition is an immersive experience: a kaleidoscopic universe of electric colours