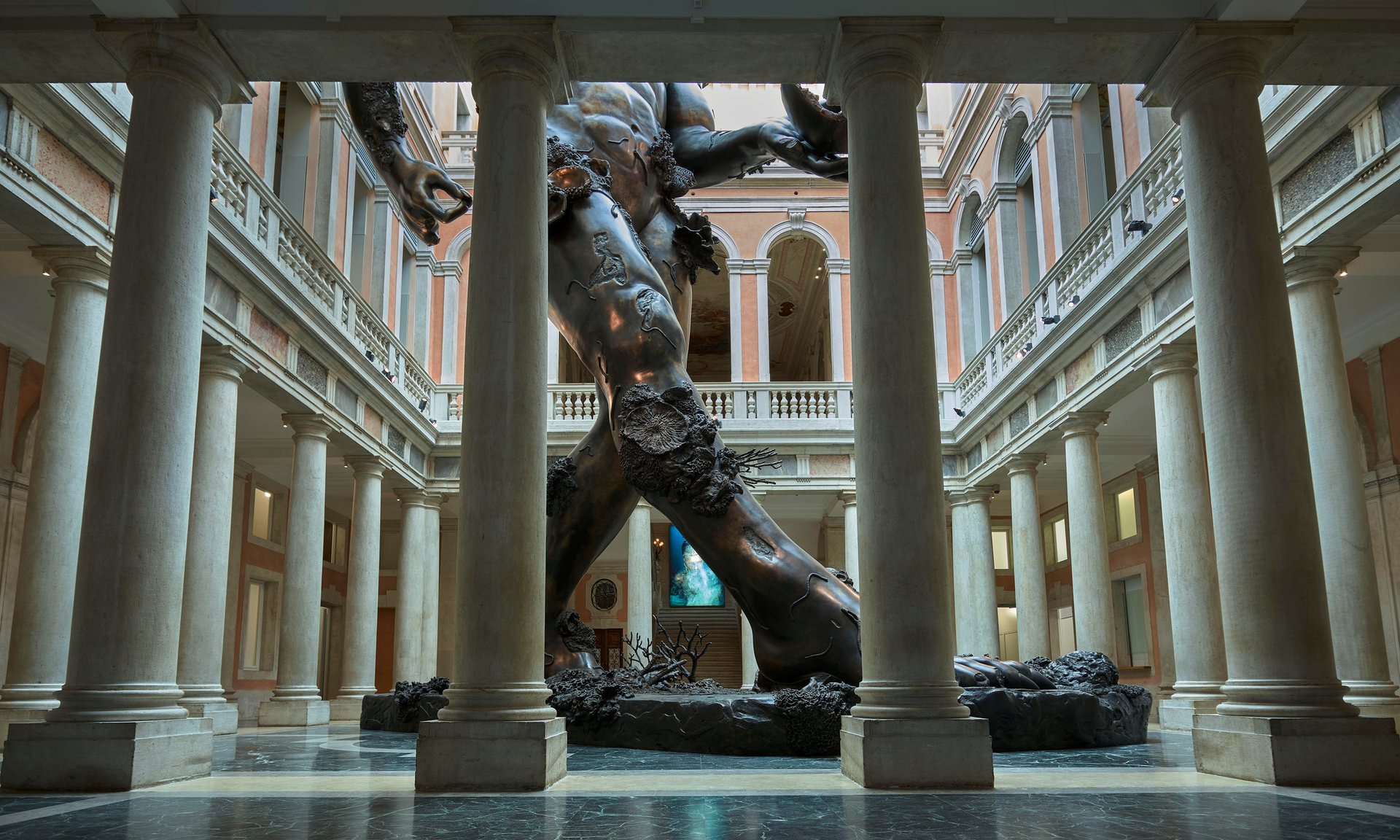 Damien Hirst‘s Demon the largest sculpture from the Wreck of the Unbelievable series, originally presented at the 2017 Venice Biennale is rising above the Greenwich Peninsula next to the IFS Cloud Cable Car.

Damien Hirst‘s Demon the 60ft tall bronze sculpture Demon with Bowl (2014) has begun to rise on the site by the Thames on the Greenwich Peninsula. Knight Dragon are leading the multi-billion pound redevelopment of the area, which was once the site of Europe’s largest gasworks and is now home to the O2 Arena.

Demon will join three smaller sculptures from the Wreck of the Unbelievable series on the peninsula: Hydra and Kali, Mermaid and The Divers.

Since emerging onto the international art scene in the late 1980s, Damien Hirst has created installations, sculptures, paintings, and drawings that examine the complex relationships between art and beauty, religion and science, and life and death. From serialized paintings of multicolored spots to animal specimens preserved in tanks of formaldehyde, his work challenges contemporary belief systems, tracing the uncertainties that lie at the heart of human experience.

In 1988, while studying at Goldsmiths College in London, Hirst curated Freeze, a rolling exhibition in three parts, featuring his work and that of fellow students. This show is considered the debut of the artists who would come to be known as the Young British Artists, or YBAs, whose approach was characterized by a combination of entrepreneurial and oppositional attitudes, the use of found materials, and an interest in shock and spectacle. In the final iteration of Freeze, Hirst included two of his Spot paintings, which he painted directly onto the wall. The Spot paintings (1986–), of which there are now more than one thousand, present multicolored spots on white or near-white grounds and are painted by hand in glossy house paint. With these works, Hirst sought to paint as a machine yet allow for the subtle imperfections of the artist’s hand. In 2012 Gagosian showed more than three hundred Spot paintings at once across all eleven of the gallery’s locations.

Like many of Hirst’s series, the Spot paintings evoke various psychological and perceptual dichotomies: they are both calming and unnerving, beautiful and ordinary. A subseries, the Pharmaceutical paintings (1986–2011), features evenly spaced, multicolored circles. The title links these works to the medicine cabinets (1988–2012) and Visual Candy paintings (1993–95), all of which consider the cultural role of prescription drugs, the ways they are advertised, and the many promises that are made to their consumers. The medicine cabinets are filled with the empty packaging of various medications, highlighting the minimalist aesthetic of the boxes and plastic containers. The Visual Candy paintings push the idea of false promises even further. Alluding to movements including Impressionism, Abstract Expressionism, and Pop art, they are exuberant, colorful paintings with euphoric, perhaps facetious, titles such as Happy Happy Happy (1994), Wowee Zowee (1993), and Super Silly Fun (1993).

In 1991 Hirst created The Physical Impossibility of Death in the Mind of Someone Living: a fourteen-foot tiger shark preserved in a tank of formaldehyde. This work, part of the Natural History series (1991–2013), has become a landmark of contemporary art and exemplifies Hirst’s interest in bridging the gap between art and science. The Natural History series includes additional taxidermied animals, including sheep, cows, a zebra, a dove, and even a “unicorn”—some of which are bisected or flayed. That same year, in London, Hirst presented In and Out of Love (White Paintings and Live Butterflies), an exhibition featuring real pupas glued to white canvases. The pupas hatched in the gallery, releasing live butterflies into the space. In 1997 Hirst collaborated on Pharmacy Restaurant and Bar in London, for which he designed the interior, transforming his work into an immersive environment.

Since the early 2000s Hirst has produced ambitious, captivating works ranging from the kaleidoscopic butterfly paintings (2001–08)—made by placing thousands of butterfly wings in intricate geometric patterns onto painted canvases—to For the Love of God (2007), a platinum cast of a human skull set with 8,601 diamonds. Hirst’s first major retrospective, The Agony and the Ecstasy, was presented by the Museo Archeologico Nazionale in Naples, Italy, in 2004, and he was recognized in 2012 with a major retrospective at Tate Modern in London. While his 2017 exhibition Treasures from the Wreck of the Unbelievable filled the Palazzo Grassi and Punta della Dogana in Venice with monumental, fantastical sculptures made of precious metals and stones, covered in illusionistic barnacles, Hirst subsequently returned to the gestural immediacy of painting with the Veil paintings (2017–18), in which he continued his examination of color and its effects on the eye.

In 2015 Hirst opened the Newport Street Gallery in London, a realization of his long-term ambition to share his art collection with the public.