“My creative process is relentless… its circular.”

Multimedia contemporary artist Michael Alan was born and raised in New York City (during the citywide blackout of 1977); and so began his bittersweet love affair with New York. Alan’s fascination with each breath of the city is reflected not only in his wonderfully manic and arresting drawings, but through each of the mediums he works in (of which there are many.) The energy and strength in Alan’s performances, paintings, drawings and various other forms of expression is complex and palpable—difficult and warm—repelling and engaging. Such constant (but somehow always evolving) and complicated dichotomies parallel those of the artist’s experience growing up on the streets of Manhattan. “Many people have a romantic vision of New York, fantastical and dreamlike, large buildings, and big money.” Alan bursts this bubble beautifully; he is fiercely dedicated to representing human life authentically, paying close attention to silenced voices. “I am a slave to NY, one of the last of my kind.” There is no question that the artist loves his hometown. Instead of advertising a realized American dream, though, Alan pulls back the curtain to expose his (and many other New Yorker’s) reality, even if it is not always ‘pretty.’ Alan’s obsession with representing an authentic human existence not only drives the physical act of producing art, but ultimately sets this artist apart. I was lucky enough to sit down with this brilliant and inspiring man to discuss what makes him tick, how his process began, and what it looks like now.

How did your career as an artist begin?

Drawing was my first memory. It was how I understood humans and my surroundings. It was all I did. I made drawings and paintings at home, around the streets, and everywhere I went. But I didn’t realise I was making “art.” I was an outsider in my own city. I still am. There is a part of New York that is often overlooked—a whole world of people growing up in poverty, despair, danger, and chaos. I came up on the back end. My dad was a postal worker who worked the night shift loading trucks and my mom was a Bushwick poet. The art world in New York has a great way of keeping you out if you are not a part of it. Fortunately, my fame and notoriety as a young events coordinator, musician and street artist put me on the map. I started selling drawings at age 13; by 16 I was showing and selling. The difficult time I had growing up in NYC gave me perspective—one that is not often featured. My work aims to share those realities so others can grasp the social difference we have in NYC and make change.

Did you study art formally?

I went to Hunter College for creative writing where my professors noticed me drawing in class and encouraged me to study art formally (suggested I attend the School of Visual Arts). As soon as I had my own studio there, I went all in and tried all mediums. I stayed in the studio all night, hanging outside the window smoking cigarettes, drinking beers, and painting. SVA offered a new kind of promising life. I was very into the New York underground street scene—I still am. But the studio made me really focus. I befriended my professors who were a constant source of inspiration (partly because they were excited to teach me) and were incredibly kind. I was bringing a different slice of New York to the school (one that usually receives a lot of judgement) but SVA saluted me for it.

Can you describe your creative process?

My creative process is rigorous, an intense exploration of NYC. The process involves diving deeply into a meditation state, leaving human needs, wants and situations behind. I try to leave this place and find

something new. If, and when I do, I share it with everyone. I work in all different formats, from drawing and painting to fashion, performance, photography, and music—blending and using each medium with another. Layers play a major role in my work because I want it to be difficult for viewers to understand how my work is made. I want to get lost in the work. I intentionally aim to perplex myself and my audience.

In some ways areas of New York act as a sort of canvas for you—has this always been the case?

Yes, this is true… literally and figuratively. I grew up roaming around and exploring each borough and this is where most of my work originated. I experienced all the changes through gentrification, racism, police brutality, gangs, and the pain of watching friends die at a young age so I have a story for every street. There are a lot of hardships here in New York that people ignore. The city takes so much, and asks for so much. At the same time I love New York’s extreme, unique energy.

If you feel like you’re lacking inspiration or having an ‘artist’s block’ what do you do?

This is a problem that I don’t struggle with. I think that I struggle with a ‘life block’ where I’m not doing things that other humans are doing at all. I’m fully immersed in art.

If you had to give 3 pieces of advice to a young aspiring artist, what would they be?

1. If you don’t live for the sake of making, find another gig.

2. Don’t look at other artists. The more you see the more you copy, and you will never find your voice.

3. You make art to create something new, not to be a pop icon.

Did the pandemic change/alter your process, how?

I watched a lot of people flee NYC and I watched a lot of hardship and sorrow, but I stayed. I painted and ran around performing with Jadda continuing our project The Living Installation. We would go out every night performing around the city and became a symbol of hope for NYC for many. From the beginning of the pandemic to now we’ve been posting a lot of iconic NYC artwork and videos to keep the spirit alive. In a sense the pandemic simplified my life. Less is more, life is now.

What does it mean to you to be an artist living and working in America today?

It is difficult because America is a tough place. Historically much of American art represented status, money and fame versus merit. This obsession destroys “art” and replaces it with a system of ‘success’ and ‘failure.’ If America is to change, it’s the job of the painter to show different ways to move forward. 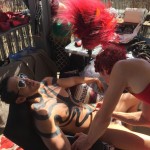 PREVIEW: ARCADIA AMERICANA a multimedia exploration into the heart of the American Dream.

Born from a month-long research trip across America, the ARCADIA AMERICANA project explores the themes of aspirational culture, kitsch, and the utopian imagery at the heart of the American Dream.

Japanese contemporary artist reconstructs the Martian landscape to look at the contemporary cultural fascination with science through the hunger for doomsday scenarios and conspiracy theories.

Jack Pierson at Cheim & Read Through to November 14th