Friedrich Kunath’s work is permeated with ambiguity. His personal journey from East to West Berlin, towards his new-found home in Los Angeles presented Kunath with a wide variety of source material ranging from the canon of art history and German philosophy to the idiom of kitsch and the make-believe world of Hollywood and LA. Many of which are impacted by two poles—the culture of wisdom and popular culture—to the point of obsession and even, at times, systematization. Dealing with the universal themes of human existence, such as love, loss, optimism, vulnerability and melancholy, he serves a variety of media, ranging from painting, sculpture, drawing, video and photography, to expansive installations, all provided with a tragicomic pathos and dreams of possibilities. In almost every work, the realization is tangible that the world is a spectacle of unfulfilled dreams, in which the rawness of life is fled through the parallel universe of popular culture.

His new paintings are an integration of his own unconsciousness and the overlapping awareness of himself and the world. They begin with a complete reset of intent, open to automatism and collections of banal everyday looping thoughts, what Friedrich Kunath refers to as “pictorial Tourette’s”. He presents a variety of drawing styles which are layered onto thick layers of colorful paint, often accompanied by handwritten texts, cartoons and reoccurring motifs. His images move freely between abstraction and representation, overlaid with various visual references, from satirical comics, doodles, to text passages with nuanced puns and thus strike a balance between irony and despair. Irony and melancholy melt together in a cheerful vocabulary, with a new glorious sunset on the horizon.

Friedrich Kunath makes use of the grotesque and exaggerations in his works without clinging to superficial humor. The images and scenes portrayed as sculptures, paintings, or detailed drawings and caricatures are not harmless jokes, but rather ambiguous metaphors for the present. He encounters the question regarding self-positioning in the framework of various cultural influences with knowing irony. His pieces undercut ingrained pictorial traditions and conventions and link seemingly incompatible approaches such as humor and melancholy, narration and abstraction or fiction and reality. 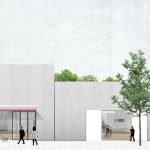 Tim Van Laere Gallery moves after 20 years to a new building on the Antwerp Nieuw Zuid. The new gallery is designed by OFFICE Kersten Geers David Van Severen. The opening of the new building is planned for the spring of 2019 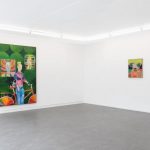