Arturo Herrera’s most recent work, exhibited in “From This Day Forwards” is a phenomenological shotgun blast. Showing at the Thomas Dane Gallery in London, soon to be freed from the restraints of a Covid-19 Lockdown, Herrera’s dynamic collage works most prominently to overwhelm the senses, in a blitz of overlapping imagery and colour, even as we vehemently struggle to understand it. Playing firmly against what late philosopher Bernard Waldenfels described as ‘the cavity’, the process by which our minds distinguish a difference between objects by establishing an outlined ‘inside’ and ‘outside’, Herrera’s art collapses such boundaries and provides a special encounter with that which struggles to be explained.

“From This Day Forwards” is composed of a variety of pieces, alike in their shared uses of photography, erratic strips of colour and the palimpsestic layering of countless images to culture a depth which stretches seemingly beyond the walls they’ve been hung on. The gallery itself is also incorporated within this framework; patterns from a book of silkscreen prints duplicated from floor to ceiling, bringing the entirety of the exhibition space into the maelstrom. There is evidence of an artist here, but through no overt narrative, nor openly artificial mise-en-scène. Even his own promotional material from 2019 has been passed through the chaos of the other pieces; emerging disrupted and schizoid at the other end, with his name half buried in the work’s texture. From frame to frame, the spectator is incrementally pushed towards confrontation without context, nor any autobiographical story, but the collages themselves, and their unstable juxtapositions.

None of the works here are titled, in another denial of form to the experience, and as one circumnavigates the gallery a suspicion begins of arise, of the missing object around which these pieces orbit. Herrera denies that this collection is inspired by the international events that have gripped us so tightly for the past year, that coronavirus has no part in it, and this may be true, but it becomes hard to ignore the striking contemporary value of his art, given the ordeal that we have been through. “From This Day Forwards” is the only information provided to contextualise the exhibition, and it lends powerfully to the world hosting it. The title denominates a point in time, and a direction that leads into the future, but one that originates in the present, with no reference to a period before now. As each of us struggles to process our memories of time spent in isolation or grief, the past can appear as narratively opaque as Herrera’s collage; a haunting intervention into our lives that frustrates interpretation.

Covid-19 or not, it is the mechanisms of trauma that form the objet petit a of the exhibition, the inability to explain lost time. It calls not to its own narrative forced upon an audience, but encourages reflection on what they can make from the patterns; the depths they can penetrate whilst tracing their own experiences in the act of interpretation. Every Untitled 2020, becomes both a signifier of trauma and the means by which to confront it, making the works almost interactive in the process.

Phenomenologist Edmund Husserl wrote that consciousness moved over the world like melody through a piece of music; each note found its meaning both in itself and in context of those that preceded it, and the expectation of what was to come; apprehension understood in terms of a building narrative. In stark contrast to this philosophy, and actively labelled as a deconstruction, Herrera’s work stands closer to a clattering of the keys, of chaotic memory thrashed against the piano in a beautiful overture to the desire to understand. In this way, it defies temporal limitations, and in resonance with a rare global moment that the Covid-19 pandemic has produced, hangs timeless across borders and boundaries. 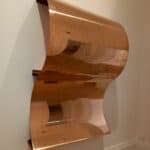 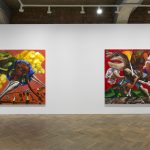