Holy Basil (Ocimum sanctum), commonly known as tulsi, is an adaptogenic herb, one of many plants whose flowers, leaves and seeds are used to help the body adapt to stress and increase energy. 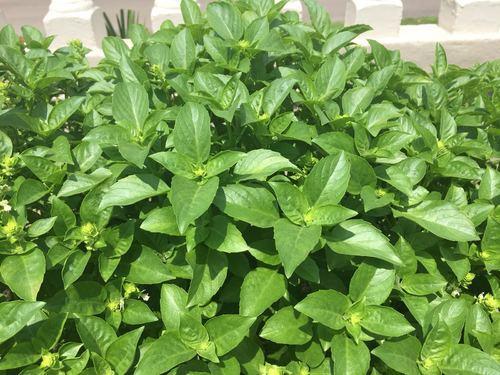 Tulsi is believed to have originated in India but can be found widely today in the tropics of Southeast Asia. While it is part of the same Lamiaceae family as its cousin, culinary basil, a popular herb renowned for its aromatic scent and flavor, tulsi holds a far more revered status in the Hindu religion and particularly in the practice of Ayurvedic medicine.

The Indian medicine tradition of Ayurveda is thousands of years old and takes its name from Sanskrit, its literal translation “the science of life.” A holistic practice, Ayurveda approaches medicine from a full-body posture, treating the individual’s physical, mental, spiritual, and emotional well-being. Ayurveda relies on healthy living practices and regular consumption of adaptogenic herbs like turmeric, ashwagandha, astragalus root, and the queen bee of adaptogenic herbs, tulsi.

The reason for tulsi’s elevated status in Ayurveda is apparent: Tulsi boasts an array of medicinal properties and is useful in treating a wide assortment of maladies. It can easily be summed up as the “anti”-rich herb with its anti-inflammatory, antioxidant, anti-depressant, and anti-bacterial properties. Compounds in tulsi such as eugenol, which provides pain relief, ursolic acid, a natural antioxidant; and lutein, which promotes eye health, have enabled tulsi to be used widely in Ayurveda to treat a broad spectrum of ailments. These include anxiety and stress, respiratory problems, exhaustion and sleeplessness, skin disorders, diarrhea, nausea, stomach ailments, and sexual problems. A preventative, its antibacterial qualities help strengthen immunity and protect organs and tissues against industrial toxins in the environment, which could lead to cancers. In addition, tulsi is also nutritionally high in vitamins A and C, iron, calcium, and zinc.

How Tulsi Works Synergistically With Other Adaptogenic Herbs

There are a number of adaptogenic herbs, which, combined with tulsi, work synergistically to improve or maintain good health. One such herb is turmeric (Curcuma longa), a powder derived from a plant in the ginger family. In Ayurveda, turmeric is touted for providing relief for stress, anxiety, and depression. Partnered with tulsi leaves in a daily tea, the combined strength of these adaptogenic herbs helps to combat respiratory illness, detoxify the kidneys, treat common stomach ailments as well as constipation, and help to prevent cancer.

Ashwagandha (Withania somnifera), an evergreen shrub prominent in India and the Middle East, is another herb rich in tulsi-like “anti” qualities. It is best associated with the promotion of longevity and, like tulsi, is admired for its calming effects. In Ayurveda, it is taken as a remedy for arthritis, stomach pain, insomnia, and skin conditions. Ashwagandha root powder combined with tulsi powder and taken in a tea has been found to be effective in reducing stress along with its accompanying fatigue and irritability.

Several other adaptogenic herbs are used in Ayurvedic medicine, including Siberian ginseng, also known as eleuthero. Derived from a shrub and commonly found in the far east, it increases energy and reduces fatigue and stress. It also is used to treat muscle and joint pain.

Astragalus (Astragalus membranaceus) root is yet another adaptogenic herb. Most common in the temperate regions of China, it is derived from a plant in the ginger family. Astragalus root is known for its immune-strengthening qualities and is effective in providing relief from the negative by-products of chemotherapy, such as nausea and vomiting. Its anti-inflammatory properties also help to reduce blood pressure and to prevent plaque buildup in the arteries.

In Western medicine, the jury is still out on the benefits of tulsi, as the practice relies heavily on clinical trials, and to date, there have been few comprehensive human studies published. The science, however, is emerging. There have been a number of promising animal studies, including one in 2006 that found tulsi improving the cholesterol level in rabbits, studies on rats finding a decrease in blood sugar after consuming tulsi basil leaf powder over some time, and a 2002 study on mice finding it may provide protection against mercury poisoning.